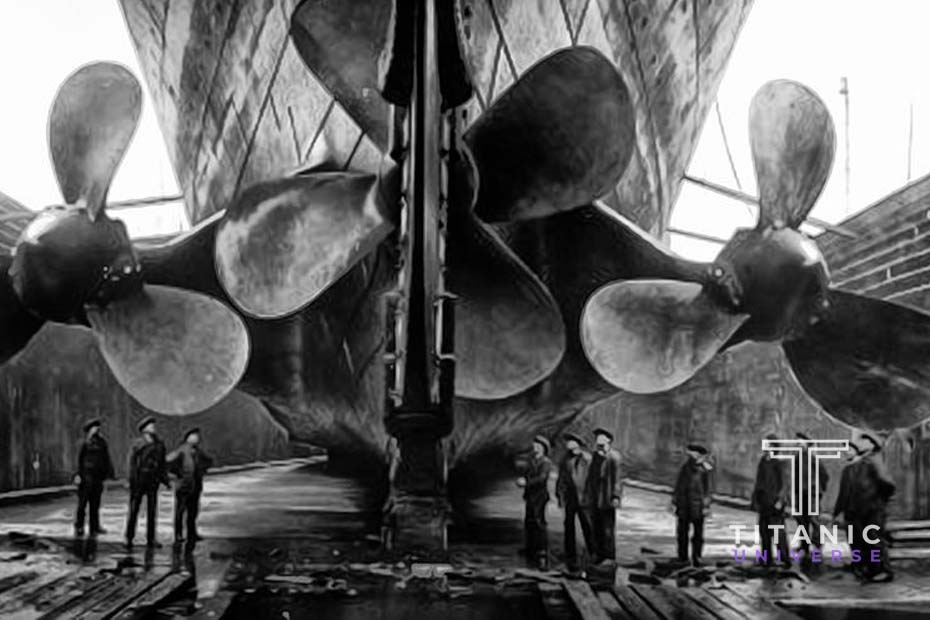 For the average person on the street, not much thought is given to what actually propelled the Titanic across the Atlantic to its rendezvous with an iceberg, but for the Titanic and shipping buffs, the type of propellers fitted to her had been the source of a much-debated mystery. Her sister ship, The Olympic, was photographed with a four-bladed propeller leading many to believe that the Titanic must have had the same configuration. Many models, art, illustrations, and films were produced on this assumption.

How Many Blades Did the Propellers Have?

However, a recently discovered engineering notebook from Harland and Wolff, the builders of the Titanic, categorically states that she had a three-bladed central propeller. Also revealed was the fact that Titanic’s big sister, The Olympic, had many changes during her life, no doubt if the Titanic had survived her first voyage, then she would have undergone the same modification process. The Titanic would have been built with improvements made to The Olympic in mind. As one would expect, much is learned through use and experience and it seems that The Olympic was later fitted with a three-blade propeller.

How Fast Did the Propellers Spin?

The propellers span at about 75RPM (revolutions per minute), giving her a speed of approximately 26Knots. Powering these, The Titanic had two huge steam engines, each one weighing 720 tons and producing a combined power of 30,000 Horsepower. The reciprocal way in which those steam engines worked meant that the three-propeller option was the most efficient at the time in harnessing the available power.

What Were the Titanic’s Propellers Made Of?

The central propeller was cast in one whole piece from Manganese Bronze, weighing 22 tons. Recent photos from the wreck show one of the propellers lying on the bottom of the ocean in good condition, this would be expected with Bronze. They will almost certainly outlive the rest of the ship which is slowly corroding away in the depths. The two larger wing propellers were not cast in a single piece but in sections, also from Manganese Bronze. The two wing propellers weigh about 38 tons each.

At the time, the main competitor of the Titanic’s owners, White Star Line, was The renowned Cunard shipping line, founded in 1840 by Samuel Cunard, It had, by the turn of the century, become a colossus in the shipping world. Its power and influence meant it had received favorable loans from the British Government to build its luxury Liners, a loan amounting to just over $300 million with an interest rate of just two and three-quarter percent.

To compete with them, White Star Line not only had to cut costs in the construction of vessels but also make them as efficient as possible. This led to much experimentation and quite a bit of trial and error with a constant modification process. In one final irony, on that fateful day in 1912 when the Titanic began to sink, it was a Cunard ship, the RMS Carpathia, which first received a mayday signal from the stricken ship and changed course to collect the survivors. The Carpathia would go on to meet an equally grizzly fate, finally being sunk by a German U-Boat in 1918.