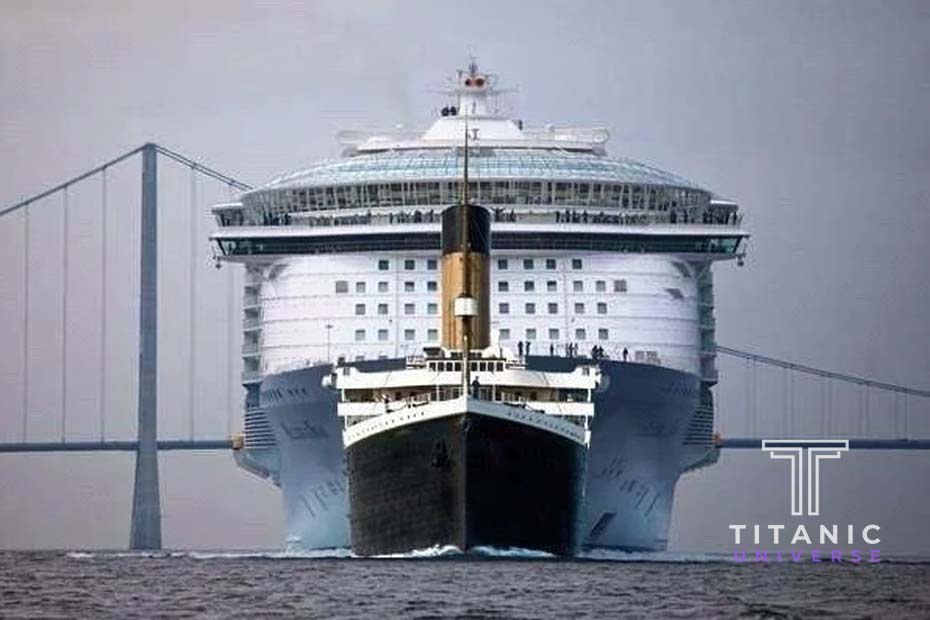 When the Titanic set sail on her ill-fated maiden voyage in 1912, she was the largest ship to ever enter service. Designed by Thomas Andrews, the Titanic could hold around 3,300 passengers, cost a staggering £7.5 million to build and was hailed as a feat of engineering. But how exactly does she measure up to today’s cruise ships? We take a look at the size and scale of the Titanic compared to cruise ship proportions today.

Was the Titanic the world’s first cruise ship?

The Titanic was not designed as a cruise ship. She was, in fact, an ocean liner designed to carry passengers and mail across the Atlantic. However, when the ship was built by White Line Stars in 1912, she stood head and shoulders above other vessels at the time, not just due to her size but also the emphasis on luxury, comfort and entertainment. This made her more akin to today’s cruise ships and in the context of the early 20th century, she was the closest thing to a cruise ship there was.

When compared to modern cruise ships, the Titanic does come up smaller but, in some cases, only just. The average cruise vessel is around 298 meters long, just a few meters longer than the Titanic. But just as it was in 1912, the race is constantly on to build bigger and better cruise ships. As of January 2022, the largest cruise ship in the world was the Wonder of the Seas, which is operated by Royal Caribbean International. It measures a staggering 362 meters long and 64 meters wide. The average ship length of all of the Royal Caribbean’s active fleet is 325 meters. Of course, this difference in proportion also impacts on the gross tonnage of each vessel. The Titanic had a gross tonnage of 46,328 tons, while the Wonder of the Seas has a gross tonnage of 236,857 tons across 18 decks.

In the early 20th century, the size and scale of the Titanic was almost unimaginable, but today, thanks to advancements in engineering, the Titanic would be unlikely to make the top 100 of the world’s biggest vessels.

The Number of Decks on the Titanic vs Cruise Ship?

It is believed that the Titanic had a total of 10 decks, from the Boat Deck at the top down through to the Promenade Deck, six passenger decks, the Orlop deck and the Tank Top. Today’s modern cruise ships tend to have anywhere between 12 and 16 decks. Wonder of the Seas has a total of 18 decks.

The Titanic had a total of 2,229 people on board when she set sail, but she was not full. Passengers accounted for 1,316 of this figure, with crew making up the rest. Around 325 people were travelling in first class, 285 were in second class and 706 were travelling in third class. The design capacity of the Titanic was 2,435 passengers.

It is estimated that today, the average cruise ship passenger capacity is around 3,000 guests. For the world’s biggest cruise ship Wonder of the Seas, capacity actually stands at 6,988 guests, which is more than two and a half times that of the Titanic.

A total of 913 crew members were on board the Titanic when she sank and 215 of these people survived. In contrast, the Wonder of the Seas has 2,400 staff, while Harmony of the Seas (the second largest cruise ship in the world) has 2,300. With greater emphasis on service, entertainment and luxury, today’s cruise ships have far larger crews to keep guests safe, entertained and happy.

When staff and passenger numbers are combined, the Titanic had an overall capacity of 3,327, while Wonder of the Seas has a total capacity of 9,822 people.

Onboard Facilities and Entertainment: Titanic vs Modern Cruise Ship

The Titanic placed huge emphasis on luxury, sport and entertainment and many of the facilities included on board were completely unheard of at the time. The Titanic boasted her own heated swimming pool, along with Turkish baths, electric baths and a steam room. Upper class customers could enjoy a private massage room, squash court and gymnasium complete with a punch bag, rowing machine, exercise bikes and electric camels. There was even a small barber shop.

When it came to dining, the Titanic offered an a la carte restaurant which was modelled on The Ritz and was open only to first class passengers. It also had a huge first-class dining room measuring 1,000m2 in area and able to accommodate up to 554 passengers, making it the largest room on the ship.

The Verandah (CORR) Café was situated on deck A, close to the second-class staircase, while on deck B, passengers could enjoy a meal at the Café Parisien, which could seat up to 68 passengers. There were also reception rooms, lounges, a smoking room, reading and writing room, promenade deck and an ornate grand staircase. This staircase was one of the ship’s key features and was also a major feature in James Cameron’s 1997 film.

Today’s modern cruise ships, in comparison, are seen as floating resorts and offer a vast range of facilities and venues on board. Their greater size and capacity allow them to provide more entertainment, which is their entire focus. The world’s biggest cruise ship Wonder of the Seas boasts 19 swimming pools on board, along with 20 restaurants. It also has a children’s water park, a spa, beauty salon and hairdressers, a theatre, an aquatic theatre, a zip line and multiple bars and suites.

How Does the Titanic Measure up Against Today’s Modern Cruise Ships?

There is no doubt that in terms of size, scale and on-board facilities, the Titanic really was a feat of maritime engineering the like of which had never been seen before. While she was never designed to be solely a cruise ship, with her focus on comfort and luxury, she was the closest thing to a cruise ship that the early 20th century had to offer.

Advancements in technology, engineering and manufacturing mean that today’s cruise ships are bigger than the Titanic. While she may be comparable in size to some of the world’s smaller cruise ships, The Titanic pales in comparison to some of today’s largest cruise ships, some of which are as much as three times her size.

Whether any of today’s ships will ever match Titanic’s legendary status is another matter entirely.