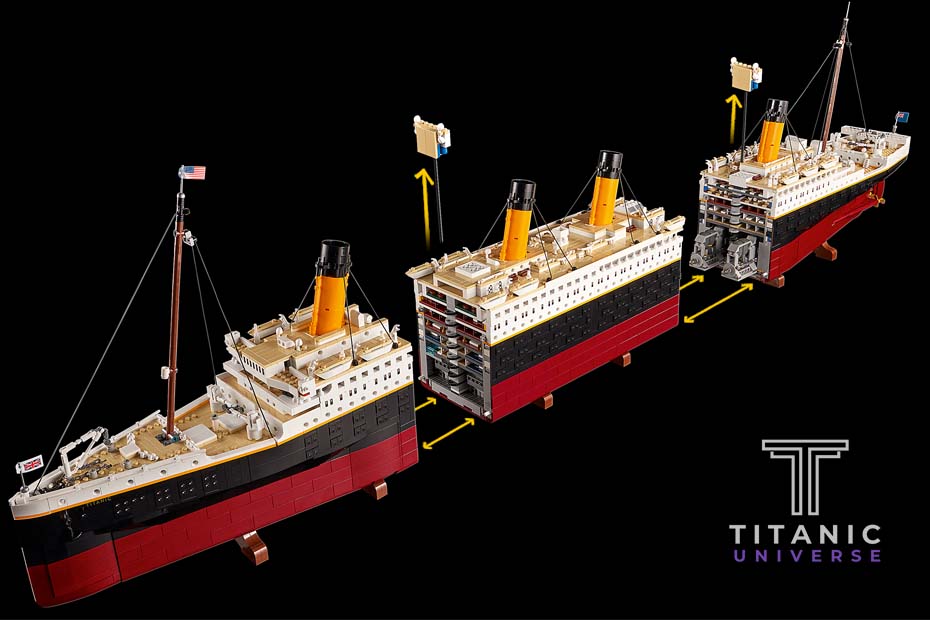 At long last, here is the Lego kit you’ve been waiting for: The Titanic Ship 10294 is finally here and it’s a big one. Measuring 1.35 meters (4.4 feet) fully built, the Lego Titanic will become the pride and joy of your Titanic memorabilia collection…you’ll just need to get your hands on one. And build it.

Below we explore some of the Lego Titanic’s most impressive features, including its incredible attention to detail and the stunning workmanship employed on the booklets it comes with. It truly is a fantastic kit and you’ll be sure to want to add it to your collection just as soon as you read the highlights below.

What makes the Lego Titanic special?

The ill-fated ocean liner has recently marked the 110th anniversary of her disastrous sinking. Lego aims to commemorate this in a respectful manner that, at the same time, really showcases just how huge the Titanic was. The RMS Titanic was an unprecedented ship with an incredible capacity. As such, the Lego Titanic will provide detailed views with an eye on authenticity, as well as cross sections to let you take a glimpse of the famed grand staircase, the smoking lounge, the boiler room, and more. You’ll also find lots of photos and references to the real Titanic in the accompanying booklets, making it a real voyage into the past and all of the history as well as the sadness surrounding this great tragedy. Even the boxes are a treat for Titanic fans, with each one being carefully constructed and printed with beautiful artwork.

How many pieces does the Lego Titanic have?

The Lego Titanic has an incredible 9,090 pieces, making it the second largest set in Lego’s entire collection, coming in only after the toy giant’s World Map kit. This means that even if you are a Lego aficionado and really know your stuff, you’ll be working at your very own Titanic for weeks, if not months. That being said, some extreme Lego fans have managed to build the entire kit in as little as just under 9 hours non-stop. At this number of pieces, the Titanic is also recommended only for adults or older children. If you think the Titanic set will be too much to handle at that many pieces, there is one advantage: Lego has cleverly split this kit into three distinct parts, making it a lot easier to get your head around it. There are also three separate instruction booklets which even include real photos and information about the Titanic. These are a real treat for Titanic fans.

How much is the Lego Titanic?

Currently, this amazing set retails at $679.99. Even at that high price point, it’s hard to get hold of her. At the time of writing, only the official Lego site seems to have The Titanic in stock. With a delivery of 3-5 business days, you could be building your very own Titanic in under a week. Lego have also set a limit of two model kits per person, to prevent inflated sales prices via re-sellers on sites such as eBay. There tend to be very few coupons or sales when it comes to Lego, but you may wish to try your luck with Black Friday or pre-holiday sales – that is, if you’re okay with risking the Titanic selling out. Many of Lego’s most popular models are currently sold out, showing just how high the demand is for these special building kits.

How accurate is the Lego Titanic?

Lego really took care to recreate well-known parts of the ship, such as the promenade deck, the bridge, and even the swimming pool. The real Titanic was said to be 259m long, as well as 28m in width. This makes the Lego Titanic an impressively accurate scale of 1:200. Reviewers who have already completed their Titanic are falling over themselves with superlatives, calling it the most grandiose piece Lego has ever created. Suffice to say, it’s as accurate as a Lego kit is going to get and we think it’s been done so respectfully and beautifully that it really honors the magnitude and impressive engineering of the ship and the tragedy of her end.

Is the Lego Titanic worth it?

We definitely think so, even at this high a price. The Lego Titanic isn’t a toy, but rather a model kit that you will be able to showcase. Lego even provides a nameplate to complete the display, so you can proudly present the Titanic to friends and family, making it the ultimate talking point. The Lego Titanic makes an incredible birthday or Christmas present, as well as a special gift for fans of this most infamous of ocean liners. It should also be added that the Lego Titanic is still reasonably far from Lego’s most expensive kits (namely the Millennium Falcon and the AT-AT from Star Wars). However, it’s still pricey, but that is to be expected for such an impressive piece with so many beautiful details and extras. You’re also getting a good long build time, making the cost-per-brick ratio pretty reasonable after all.

If you’re thinking of getting your hands on the Lego Titanic Ship 10294, you can buy it directly from Lego or authorized retailers. Bear in mind, however, that if you are looking to buy your Titanic for an occasion, this one may sell out again very quickly, so you’ll want to act fast. As a final bonus for superfans, you can also get your hands on a separate lighting kit (not supplied with the original set) to make your Titanic shine at night too.