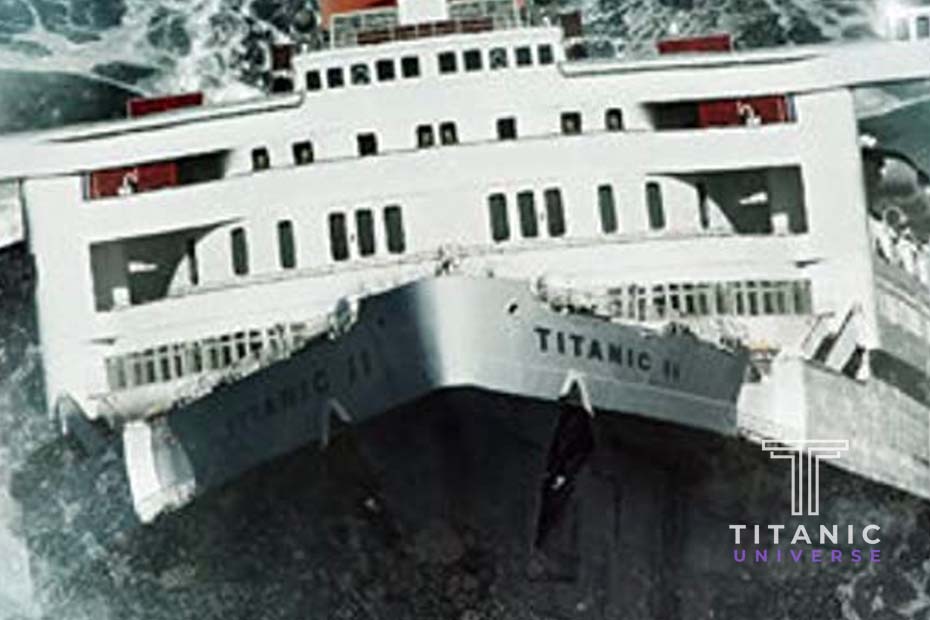 Titanic 2 was made by The Asylum, a production company known for its fine selection of B-rated movies, including the mega-hit Sharknado.  The film stars Marie Westbrook, Bruce Davison, and Shane Van Dyke, who not only wrote and directed Titanic 2, but is also the grandson of comedic legend, Dick Van Dyke. Shane Van Dyke has made quite a career for himself in the B-movie industry by being a frequent star of some of The Asylum’s finest films such as Transmorphers: Fall of Man.

The Plot of Titanic 2

The beginning of the movie Titanic 2 starts with a young man, Shane Van Dyke, surfing in a wet suit in the company of icebergs. While he’s riding the waves, a nearby iceberg begins losing chunks of ice, which naturally causes a couple of huge waves to form and head right for him. He manages to get away before the waves take him, but icebergs falling into the ocean can cause problems.  The scene then changes to Titanic 2 at her dock, the ship being used is the Queen Mary is docked in Long Beach, and people are waving, cheering, and climbing on board.  Now the viewer finds out that the young man surfing among icebergs is the same man that funded the construction of Titanic 2, and his name is Hayden Walsh.  With a blow of her mighty steam whistles, it’s time for Titanic 2 to head out to sea with many passengers, Hayden Walsh, and his ex-girlfriend, who watches him come on board with four supermodels, yet is not over him.  When one of Walsh’s beautiful young women looks around with concern at the lifeboats, Walsh proclaims, “they’re just for show, Darling.”  The ex-girlfriend, Amy Maine, is unsure about this voyage. Her father, James Maine, who works for the Coast Guard, calls to try and convince her not to go because the ship “barely passed inspection,” but Amy is a nurse assigned to the infirmary on Titanic 2 and is determined to go on the voyage.

There Is a Problem in the North Atlantic

Titanic 2 leaves New York City, and there is much fanfare as she does with lots of fireworks, and the Queen Mary resembles the Titanic, making at least part of this movie believable.  While Titanic 2 is heading out to sea, the movie shifts to Amy’s father, James, and he arrives at a frozen destination to rescue some scientists, and one of them tells him that the ice is falling off in huge chunks.  She also tells him that if a big enough chunk of iceberg falls into the ocean, the effects will be like ripples across a pond. However, when a piece of ice the size of Rhode Island falls into the ocean, it’s not just ripples in a pond but giant tsunami waves that can be very dangerous to anything that just happens to be on the water.

The viewer gets to see the fancy bridge, and the captain and first officer are talking about the conditions, which include very cold water and ice ahead. The first officer comments on the fact that they are headed to where the Titanic went down, to which the captain remarks that things will be different this time, but the first officer looks at him like he’s not so sure.  The movie switches to James Maine and the scientist, and the giant chunk of ice that the scientist warned him about breaks off. Now there is a significant problem because a giant tsunami is coming, which will affect the whole North Atlantic, including the Titanic 2.

Titanic 2 shows people that even the fanciest equipment on the most state-of-the-art ship might not be enough against the power of Mother Nature in the form of an 840-mile-per-hour tsunami that can quickly slam a ship into an iceberg that can rip it in half.  The Coast Guard warns the captain and owner of Titanic 2 that they are in the path of the tsunami, and their solution is to try and outrun it by pushing the new ship’s engines to 50 knots.  While trying to outrun the monster wave coming their way, Titanic 2 blows an engine and has to stop. The subsequent announcement for everyone to get their life vests causes a mass panic, which Captain Smith was trying to avoid on the real Titanic.  When the big wave finally arrives, an iceberg riding that giant wave pierces the starboard side of Titanic 2 like an arrow, which does cause it to start to take on water. When questioned about the flooding, Hayden Walsh tells the captain that the ship was only designed for a head-on collision, not a side one. The look on the captain’s face is priceless, and considering what happened to the first Titanic, no one can blame him.  The last words the captain says to the owner, in a somewhat sarcastic tone, is, “looks like history is repeating itself.”

A Hero To the Very End (Spoiler Alert!!)

Unlike Bruce Ismay, the owner of the Titanic, Hayden Walsh does not escape onto a helicopter when he has the chance but is determined to stay behind to help his passengers. While everyone else is boarding lifeboats, he goes to find Amy to make sure she gets off of the now-sinking ship. Even though Titanic 2 has plenty of lifeboats, the problem is that even more ice has fallen into the ocean, and the result is an even more giant tsunami wave that will destroy everything in its path, including Titanic 2 and any lifeboats in the water.  Hayden Walsh sacrifices himself to save Amy as a hero that did one last honorable and noble deed before he died.  Because of the second tsunami wave, the people in the lifeboat died too, so only about 6 people survive, and those were the injured ones on deck that Walsh loaded into his helicopter, which made the death toll a lot bigger than the original Titanic.

For anyone who wants to spend 90 minutes with a semi-decent movie, Titanic 2 is not as bad as people think. While the computer graphics are not as state-of-the-art as those used for the 1997 blockbuster Titanic, they aren’t that bad.  Though the idea of falling icebergs causing giant tsunamis seems a little far-fetched, the movie just shows that even a modern ship is not unsinkable and that having lifeboats for everyone is not a guarantee that people will survive if something goes horribly wrong. The Titanic 2 does sink on her maiden voyage just like her predecessor did, and for people who do not believe that lightning can strike the same place twice, the fact is that it can. There is an old superstition concerning the naming of a new ship, and a ship named for one that met with a tragic fate is considered to be terrible luck, and if Clive Palmer thinks that his Titanic replica will do everything her predecessor did not, perhaps he ought to sit down with Titanic 2 and watch the movie very closely.