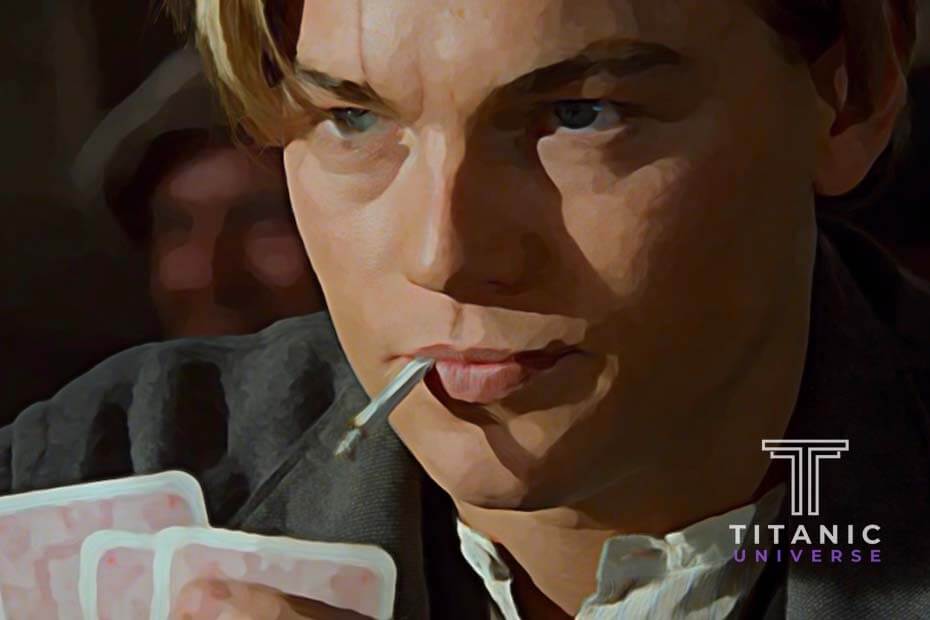 Jack Dawson is the handsome, devil-may-care protagonist of the Oscar-winning 1997 box office smash hit, Titanic. Portrayed by Leonardo DiCaprio, Jack is everything you could want in a romantic hero, kind, principled, confident and loving and he will do anything to rescue Rose from the sadness and danger in her life. He is the antithesis of the stuffy and regimented existence Rose endures and through his positive influence, she soon realizes how different her future could be.

When we first meet Jack, he is playing a game of poker in a bar in Southampton with his friend Fabrizio, as the shadow of the Titanic looms over them. Jack was born around 1892 in Chippewa Falls, Wisconsin and he is an orphan with no brothers or sisters. He has been working his way around the world since he was 15, with jobs such as catching squid on a boat in Monterey, drawing portraits in Paris and on a pier in Sante Monica for 10 cents apiece. Somehow, he has ended up in Southampton and two tickets for the Titanic are at stake in the poker game, Jack looks as if he is bluffing but as he turns the cards over, he has a full house and wins. Jack and Fabrizio rush to catch the boat and Jack is excited that he is finally getting to go home to America. On the bow of the boat, they spot dolphins gliding through the water and with the exhilaration of the wind through his hair and his arms outstretched, Jack shouts out – ‘I’m the king of the world!’

This joyful lust for life continues throughout the film, especially when he is invited to dine in first class after stopping Rose from jumping off the ship. As he wanders nervously down the stairs and past the grand clock, he quickly begins to copy how the wealthy men stand and move. His natural good humor is apparent as he starts to make Rose begin to smile and brings a little bit of joy and happiness back into her life. He also lightens the mood at the dinner table with quips about the rats in steerage and he quickly impresses his stuffy first-class dining companions.

His carefree view on life shows them you can have a happy outlook without all the extravagance if you always look for the positives – ‘I figure life’s a gift and I don’t intend on wasting it. You don’t know what hand you’re gonna get dealt next. You learn to take life as it comes at you… to make each day count.’ After getting through the dinner, he invites Rose to the party in third class, they dance, drink and laugh and possibly for the first time, Rose really begins to have fun. He shows her what her life could be like away from the rules and regulations of her status.

Jack even finds time to joke when they are in the freezing water after Titanic has sunk and says to Rose- ‘I don’t know about you, but I intend to write a strongly worded letter to the White Star Line about all of this.’

When Jack catches his first glimpse of Rose, she is silhouetted by the setting sun as she looks out from the first-class deck and he can’t take his eyes off her. Throughout the film, he shows Rose a different way their life could be and he sees her as an independent woman, not a child who has always been told what to do by her mother and Cal. Jack tells her ‘…You’re the most amazingly, astounding, wonderful, girl – woman, I’ve ever known.’ Rose is taken aback by this boldness but later she joins him on deck. He takes her hand and guides her to the stern of the boat, holding her arms outstretched and she says she feels like she is flying. This scene has the additional poignancy which the older Rose remembers – it was the last time Titanic would ever see daylight again.

On his first night on Titanic, Jack is lying on the deck and watching the stars and he hears a commotion. Rose rushes past him and he then discovers her standing on the other side of the railings at the back of the ship, looking as if she might jump. He engages with her by telling her that he will have to jump in after her to save her and how ice cold the water will be, a memory from when he fell into freezing water in Wisconsin as a child while out fishing. This story makes her pause long enough to reconsider her actions and climb back over the railings. Suddenly, the hem of her dress catches on her shoe and she slips, nearly falling to her death. Jack grabs her hand and as she screams and pleads with him to help her, he tells her ‘I’ve got you and I won’t let go.’

In their final scene together, as Rose lies freezing on the wooden panelling and Jack is shivering in the water, realizing he will probably not survive, he once more passes his strength onto her as he pleads with her to live on after this night, ‘You’re going to die an old lady warm in her bed, not here, not this night. Not like this….Winning that ticket, Rose, was the best thing that ever happened to me…it brought me to you. And I’m thankful for that…you must do me this honor. Promise me you’ll survive. That you won’t give up, no matter what happens, no matter how hopeless. Promise me now Rose, and never let go of this promise.’

He makes the ultimate sacrifice so that Rose can live a fulfilled and happy life, a truly heroic gesture that will always be remembered by film lovers around the world.