Heart of the Ocean Necklace 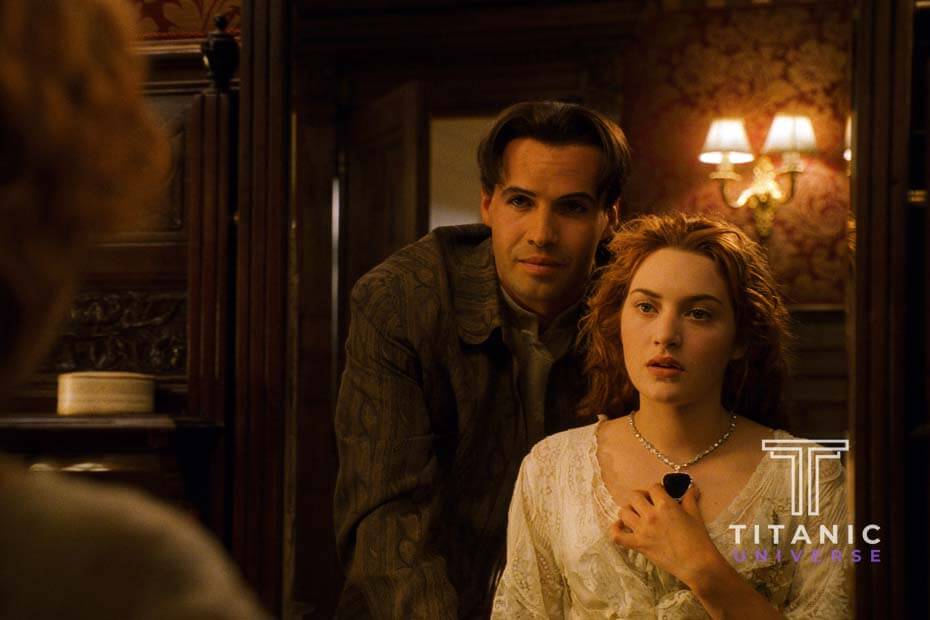 The Heart of the Ocean resurfaces in the film’s drawing of first-class Titanic Passenger Rose DeWitt Bukater, played by Gloria Stewart and Kate Winslett. The Heart of the Ocean was given to Rose by her once fiancé, Caledon “Cal” Hockley as a symbol of his love. Rose had worn the necklace while Jack Dawson (Leonardo DiCaprio) drew her nude. The drawing was later salvaged by Lovett and set the story for the Titanic movie. Before the sinking of the Titanic, Cal puts his outer coat on Rose in a show of care for her and forgets that it is in their pocket. After Rose is rescued and travels to New York, she discovers the necklace in her coat.

The film’s end shows Rose walking to the stern of the salvage ship and producing the Heart of the Ocean. She lets the necklace fall from her hand into the water. In the alternate ending of the Titanic movie, Lovett and Rose’s granddaughter Lizzie notice her walking on the deck and run to confront her. She shows them the diamond and speaks of wanting to sell it many different times but refrained from doing so in order to live without the help of Cal’s money. She lets Lovett hold it in the palm of his hand before tossing it overboard.

Origin of the Heart of the Ocean

Historical accounts tell of a blue sapphire pendant aboard the original Titanic. It was given to passenger Kate Florence Phillips by her married lover Samuel Morley as they fled to America to make a new life for themselves. Morley died in the sinking of the Titanic, and it is believed that this story was the inspiration for James Cameron’s film. The idea of a blue diamond is also present in the 1943 Titanic movie, which plays a vital role in a love affair.

The necklace for the film was created by London jewelers Asprey & Garrad using a blue cubic zirconium set in white gold. The cost of the necklace was about $10,000. Today it can be found in Twentieth Century Fox’s archives. The same jewelers were also commissioned to make a necklace using the original design, and they used a platinum-set 170-carat heart-shaped Ceylon sapphire. They surrounded this with 65 round diamonds which totaled 36 carats. The necklace was valued at $3.5 million. The necklace was sold for $2.2 million with the condition that Celine Dion would wear it to the 1998 Academy Awards ceremony, where she sang the film’s theme song, “My Heart Will Go On”. The necklace now belongs to the daughter of a wealthy Asprey client.

There have been other productions of the Heart of the Ocean as well. Jeweler Harry Winston created one that used a 15-carat blue diamond. Gloria Stuart wore the $20 million necklace at the 1998 Academy Awards.

Other less expensive reproductions have also been available since the film’s release. Noveau Treasures makes reproductions consisting of 1 ½” or 1” heart-cut blue cubic zirconium ranging from about $249 to $299.

The J Peterman Company also made reproductions in 1997 when the film was released. The necklace consisted of 137 Austrian crystals and a detachable inauthentic “blue diamond.” These are no longer available for retail, but the necklace can often be found on eBay.