Where is the Titanic now 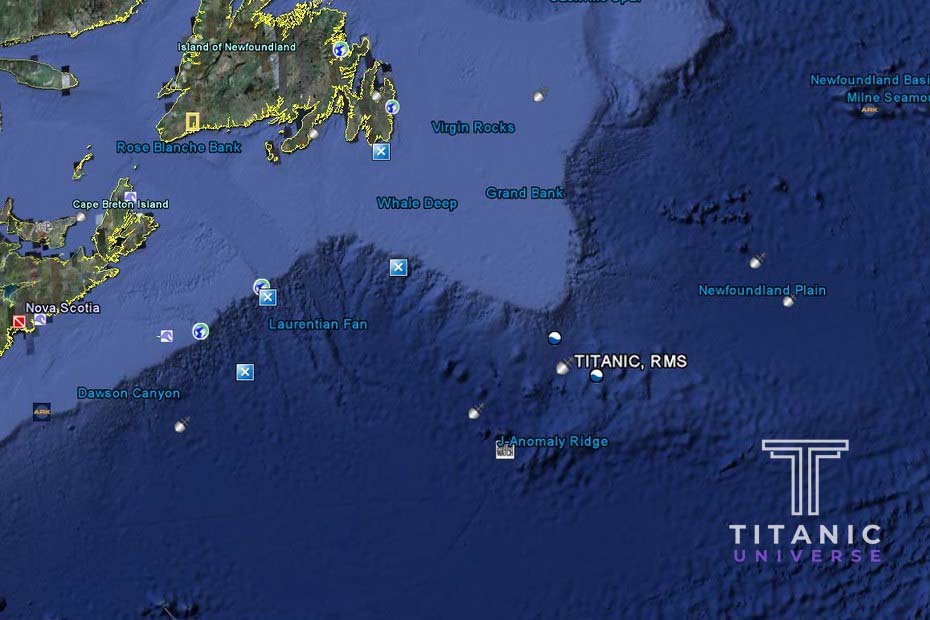 The remains of the RMS Titanic – the largest and arguably the most luxurious vessel of its time – were located at the bottom of the North Atlantic Ocean by the US Navy on 1 September 1985. Dr. Robert Ballard made the discovery using an unmanned submersible vehicle named Argo.

The location of the Titanic wreck was discovered in a concise two-week window following an exercise to locate missing nuclear naval submarines. The location site is approximately 370 nautical miles off the coast of Newfoundland in Canada, 12,600 feet below sea level. Before this, the Titanic wreckage site had remained undisturbed for more than 70 years.

During the American-led 1985 expedition, it was discovered that the ship had broken into 2 parts before hitting the seabed, with the bow section and the stern section lying around 0.6km (0.37 miles) apart. The site of the Titanic wreck location is large, with debris from the ship littering an area of approximately 5 miles across the ocean floor. Personal possessions and luggage can be found on the seabed belonging to the 2,240 passengers who embarked on RMS Titanic on the fateful day of its maiden voyage. No bodies were ever recovered from the location of the Titanic wreck, and it is believed that the sea ravaged any human remains and that only the passengers’ personal effects, shoes and some clothing remained.

In August 2014, an exploration team of divers undertook the first manned mission to the Titanic wreck location in 14 years. A total of 5 dives were completed to document, film, and photographed the remains. The ultra-high definition 4k footage has enabled researchers and scientists to establish and assess the levels of decay in the wreckage.

Many factors are causing the rapid deterioration of the Titanic wreck, with artefacts and parts of the ship being too fragile to move.

Is it possible to visit the Titanic wreck?

If you wish to see the Titanic up close and in person, now you can do precisely that. You can now dive into the ocean’s depths and see it yourself. This once-in-a-lifetime opportunity is offered by OceanGate Expeditions, a team of scientists, explorers, and filmmakers.

The remains of the Titanic are covered in stalactite-like structures called rusticles caused by microbes living under the seabed. These bacteria, known as halomonas titanicae, feed off the iron and sulfur on the ship, gradually causing it to disintegrate. The steel embedded within the stern means more favorable conditions for the microbes to thrive, which has resulted in the stern section deteriorating at a faster pace.

Unpredictable and volatile conditions under the sea have also played a part in the erosion and decay of the remains of the ocean liner. The large bathtub from the captain’s quarter which is perhaps one of the most famed of the photographed artefacts amongst Titanic enthusiasts, has now sadly deteriorated. Water pressure around the site of the Titanic wreck location is around 6,500 pounds per square inch, causing savage undercurrents around the wreck. Further damage was caused to the surface of the Titanic when these unforgiving currents resulted in an accidental collision with a submersible vehicle undertaking exploratory work.

The significant weight of the vessel’s remains is also said to be impacting the decay rate. As one level of the ship deteriorates, it falls onto the level below, causing further damage and destruction in a domino-like effect.

The wreck became a UNESCO cultural heritage site in 2012. Regular manned and unmanned explorations occur from the nearby port of St. John in Newfoundland to monitor the rapid decline of what remains from one of the worst maritime disasters in modern history. It has been predicted by scientists that nothing will remain of the Titanic shipwreck in as little as 30 years’ time. It could be as soon as the 2030s when the remains of the once magnificent steel-structured ocean liner inevitably succumb to the natural elements of the sea and disappear entirely.