Inside the Titanic Wreck 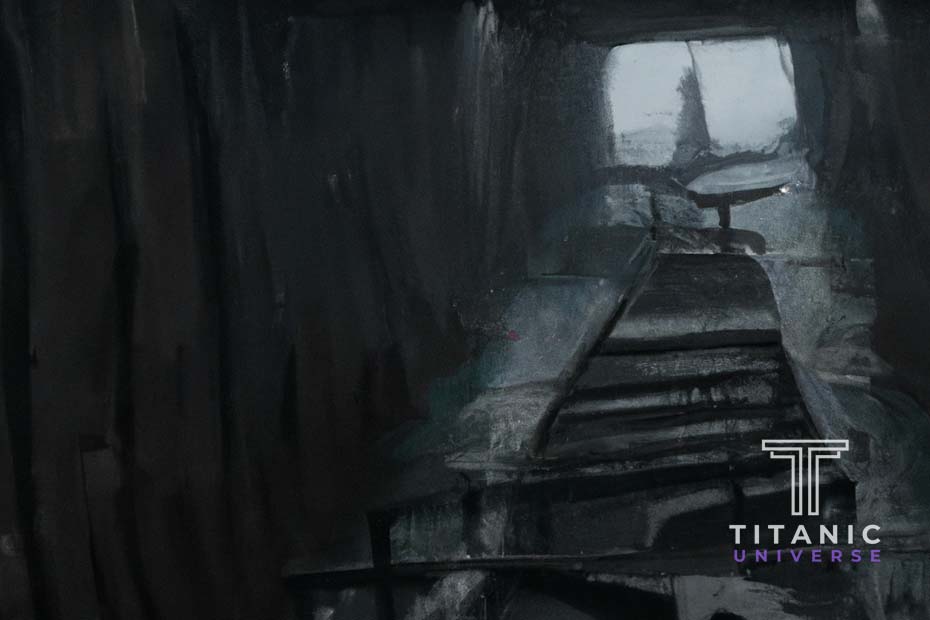 Astounding video footage recently released from Ocean Gate’s 2022 Titanic expedition using cameras fitted to their submersible, Titan, shows a temptingly detailed glimpse inside the Titanic wreck. Images of the chandeliers next to the cavernous space which once housed the grand staircase and the remains of the ship’s bridge where the famous order “turn hard to starboard” was given, have been captured in 8k, showing incredible detail and unique colors. Does this expedition mean the start of some new high-resolution pictures?

As the two halves of the Titanic hit the seabed, landing some 600 meters apart, the impact caused further damage to the already torn-apart vessel. When Titanic nosedived, the cargo in her holds shifted forwards, distorting framing and bulkheads. The stern shattered and imploded on impact and was crushed under the water pressure. The bow remained rather more intact and recognizable, and many interiors were preserved, despite damage sustained hitting the sea floor.

The first manned expedition to the wreck in 1986 captured the first detailed images inside the Titanic wreck since her discovery a year earlier. During 11 exploratory dives, the team onboard a submarine called Alvin captured iconic images, such as the grand staircase and its chandelier swaying in the currents. Over 57,000 images and hours of video were captured using an ROV named Jason Junior (JJ) attached to Alvin by a 300-foot fiber optic cable remotely controlled by a pilot.

Navigating Inside the Wreck is Hazardous

Over the years since her discovery, accessing the inside of the Titanic wreck has become more and more difficult, and new pictures from inside are rare. Rusticles growing on the wreck during her time on the seabed have made navigating the inside hazardous and challenging. Where ROVs were once able to make their way inside and down the chasm where the stairwell of the first-class grand staircase once was, between the boat deck and E deck, they now find themselves struggling to navigate through the disorienting dense rusticles hanging from the steel decking. In other places, the growth of rusticles from the sides of the corridors that remain intact has reduced the negotiable width to around 2 feet.

Inside the Wreck is Now Deteriorating

Parts of the two halves of the wreck have begun collapsing under their own weight, making some interior areas inaccessible. As one level has deteriorated at the top, it has dropped onto the next one, impacting all the lower levels. Walls and cabin compartments that were previously preserved in the bow area have collapsed, rendering them inaccessible. In contrast, in some areas where previously only ROVs could gain access, entire walls have disappeared.

With the degeneration of the wreck accelerating, it seems that the risks involved in further exploration inside are increasing and access is becoming more difficult. Sadly, the time for obtaining further images from inside the Titanic wreck is running out.

Following the successful 2022 expedition, Ocean Gate is planning annual trips to the wreck to track changes to her condition on an ongoing basis. From the detail they can capture with the submersible’s 8k cameras, it is hoped that a team of scientists and maritime archaeologists will be able to characterize and compare the decomposition year after year. Captain Smith’s famous bathtub, which a previous expedition had thought was lost forever due to damage and degeneration, was captured by Ocean Gate’s cameras during their expedition, having fallen deeper into the wreck.

As the hull disintegrates and more areas become exposed, it may be that areas previously unseen become more visible or areas previously rendered inaccessible reappear. Ocean Gate is selling seats onboard its future expeditions. For a lucky few who can afford it, there is perhaps a chance to catch a glimpse inside the Titanic wreck for themselves before it’s too late.