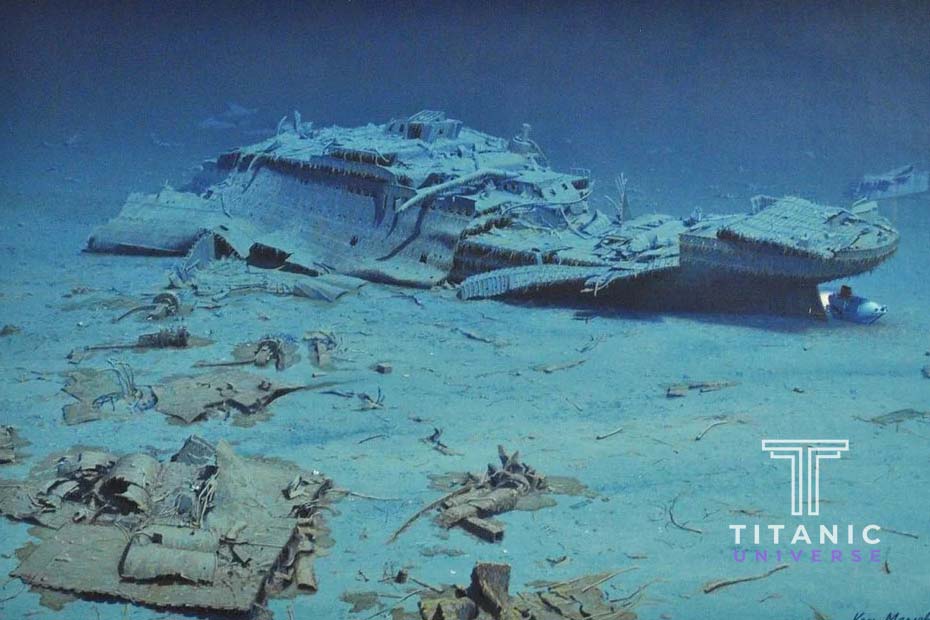 When the wreckage of the Titanic was discovered by Dr. Robert Ballard in 1985 near Newfoundland, under almost 12,500 feet (3,800 meters) of water, the most surprising discovery was not of the wreckage itself. Instead, it was about how the vast vessel was lying on the seabed in two completely separate pieces, markedly different in condition and two distinct areas of the ocean floor.

The ship’s bow section had come to rest with only some minor damage on impact with the bottom of the ocean and was instantly recognizable. The Titanic stern wreck, on the other hand, was discovered around 600 meters (2000 feet) from the bow. It had almost disintegrated and was in a state of destruction. So how could two sections of the ship face such a different fate? To answer this question, we need to look into how exactly the Titanic sank.

The sinking of the Titanic was unique in that her bow went down, and her stern went up with minimal degrees of the list to port. This is at odds with other ships of her size and stature, which would simply capsize. The manor in which the Titanic sank meant that the souls on board had far more time to escape, but it did stress the structure of the ship. The hull was not designed to hold the engines out of the water, and the stress this caused was unsustainable. This caused it to break in two at its weakest point, the exhaust vent shaft, somewhere between the third and fourth funnels, before descending into the ocean depths.

When she sank, the bow section went down with a vertical trajectory, filling itself up slowly with water and then leveling off somewhere near the bottom before slamming hard into the sea bed. The impact with the bottom of the ocean meant that the back end of the bow was slightly crushed and suffered damage, but on the whole, it remained intact. This is largely because it was filled with water. It was well equalized (the pressure inside equal to that of the outside) by the time of the impact with the sandy seabed and almost ‘sailed’ down like a submarine.

The Titanic’s stern section was ripped from the ship first, and the force of this meant that the stern descended at a greater rate without filling itself full of water. The turbulence created by the force of the descent, coupled with the lack of water inside the internal compartments of the stern, caused a build-up of pockets of air within the Titanic stern. As the water pressure increased further into the ocean, the stern began to implode and break apart, allowing all pockets of trapped air to escape and ripping the open end to pieces with explosive force. It was reported that those passengers at sea in lifeboats could hear the ‘boom’. When the stern finally hit the bottom of the seabed, the already precariously weak infrastructure, coupled with the water being dragged behind it, resulted in a complete demise and a stern no longer recognizable.

So why were the wreckages of the two parts of the Titanic found so far apart? Dr. Robert Ballard believes this is partly due to the shape of the bow and stern. The angle with which the bow sank during its descent meant that it would have propelled forward. Contrastingly, it is believed that the Titanic’s stern wreckage would have spiraled downwards in a ‘torpedo-like’ fashion.