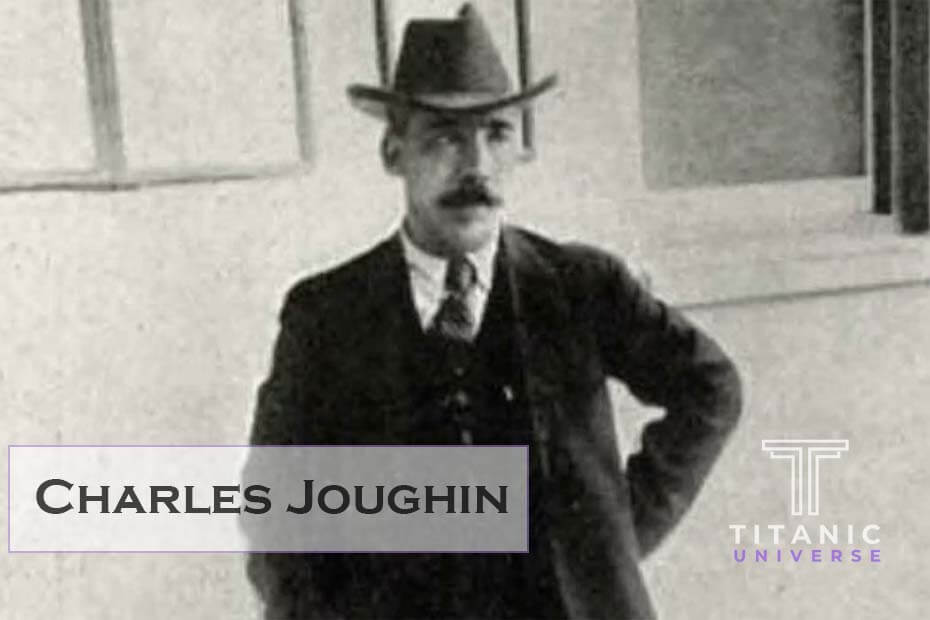 One of the most famous Titanic survivor stories is that of Charles Joughin. The man who somehow drank his way through the Titanic disaster and lived to tell the tale. Here is an account of this Titanic survivor and his bizarre story that some still find hard to swallow.

Like any cruise ship of current times, the Titanic was designed as one big party boat. You can’t go on a cruise ship without entertaining the idea of having a few cocktails to go along with the view, and the Titanic was no different. According to the ship’s manifest, the drink order for the Titanic included 1,500 bottles of wine, 15,000 champagne glasses, 20,000 bottles of beer and stout, and at least 850 bottles of spirits. The cargo manifest reveals further reserves of 17 cases of cognac, 70 cases of wine, and 191 cases of liquor. This was all in addition to the personal stocks of booze that passengers were sure to have included as well.

In addition to the copious amounts of spirits aboard the Titanic, there were also various drinking and smoking rooms. This translated into the Titanic being roughly a paradise of drinking and debauchery. Some sources speak of passengers making quips about ice after the Titanic struck the iceberg in the middle of the North Atlantic. Still, none of these have been recorded or confirmed. The Titanic ultimately did sink, but Titanic survivor Charles Joughin and his friend alcohol lived to tell the tale.

Depicted in both A night to Remember and the 1997 blockbuster Titanic movie, Charles Joughin is shown as the drunk guy hanging onto the side of the rail. Many individuals may only see the character as a commentary on a confident outlook on the sinking Titanic. Still, this character survived the disaster by warming his insides with whiskey. Those who documented the story of Joughin cite alcohol as one of the contributors to his survival. Along with this cool-headed approach to the situation, documents illustrate that the chef survived longer in the icy Atlantic due to his blood alcohol level.

During the sinking of the Titanic, Joughin and the other chefs were tasked with bringing food and supplies to put aboard the lifeboats. Many depictions of Joughin fail to submit this fact and focus more on his excessive drinking. After awaiting his fate in his cabin while hitting the bottle, Joughin ventured onto the top deck, began helping people onto lifeboats, and declined to board one himself. Returning to his cabin and further fortifying himself for another half hour, Joughin would later emerge to throw chairs and other items overboard, hoping to give those who fell overboard something to hang onto.

After the Titanic had been entirely submerged, the story cites that Joughin stepped off of the stern of the ship without as much as getting his hair wet. Accounts say that he survived three hours (although the length of time is debated) in the freezing Atlantic. Some say that this resulted from the amount of alcohol in his blood, and others have different explanations. No matter how the details read, the fact is that Joughin survived the sinking of the Titanic and managed to keep a level head during the entire disaster.

Joughin survived the Titanic, and his heroism under the influence has gone all but unnoticed over the years. Joughin died at age 78 in 1956 in Patterson, New Jersey.

In a letter to the author of  “A Night to Remember,” Walter Lord, Joughlin wrote:

Mr Walter Lord
Dear Sir,
Some secretaries brought to my notice your very splendid article “A Night to Remember” in the current issue of “The Ladies Home Journal.”

Most written accounts were hair-raising scenes which did not actually occur, except in the last few moments when those left behind made a mad rush towards what they considered a safer place, the Poop Deck. Fortunately I was all alone, when the big list to port occurred. I was able to straddle the Starboard rail (on A deck) and stepped off as the ship went under. I had expected suction of some kind, but felt none. At no time was my head underwater. just kept moving my arms and legs and kept in an upright position. No trick at all with a left-belt on. Your account of the upturned collapsible with Col.Gracie aboard was very correct. Most of the crew were familiar with life boat and Fire stations as they had manned the “Olympic” (a sister ship) previously. Some curious things are done at a time like this. Why did I lock the heavy iron door of the Bakery, stuff the heavy keys in my pocket, alongside two cakes of hard tobacco.

My conclusions of cause: Grave error on part of Captain Smith kept course in spite of ice warnings and severe drop in temperature from 5 P.M.
Loss of life: life boat shortage, for the number of passengers and crew, but many more could have been saved, had the women obeyed orders. In those circumstances the crew are helpless.