Titanic 2 Set to be the Next Knockbuster of the Year

Nobody ever thought anybody would have the audacity to make a sequel to the Titanic movie. It’s pretty clear that everyone already knows how the story ends, which doesn’t leave much room for a sequel. Despite these facts, movie company Asylum just finished post-production of Titanic 2.

Known for their humorous approach to blockbuster films, Asylum has been creating knock offs of classic films and dubbed them “Knockbusters”. Asylum has just finished production and the Titanic II movie will star Brooke Burns and Bruce Davison.

To get a better idea of what to expect from Titanic 2, there are some other films that were produced by Asylum: The Terminators, Street Racer, Sunday School Musical, Transmorphers, Snakes on a Train-you get the idea. Expect Titanic 2 to be an absolutely ludicrous knockbuster and nothing like the original film.

Being released for the Titanic 100th anniversary, the synopsis reads something like this:

“On the 100th anniversary of the original voyage, a modern luxury liner christened “Titanic 2,” follows the path of its namesake. But when a tsunami hurls an ice berg into the new ship’s path, the passengers and crew must fight to avoid a similar fate.” 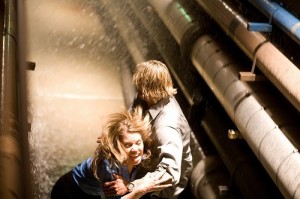