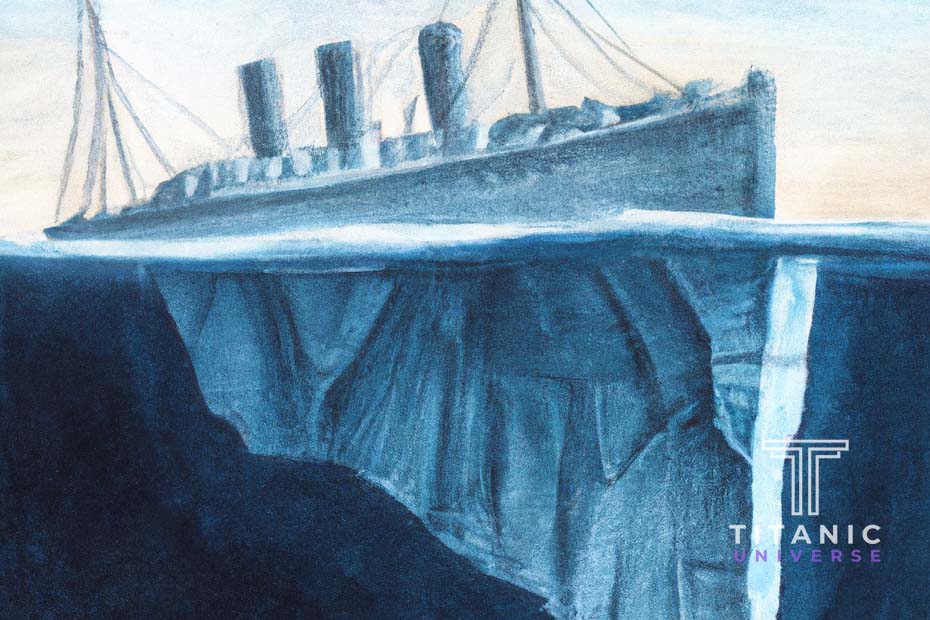 While naturally, the story of the sinking of the Titanic focuses on the human side of the tragedy, the terrible loss of life, and the brave and sometimes not-so-brave actions of the people involved and the human errors, there is another side to this fascinating tale – the Iceberg. The Titanic was not the first or last ship to be sunk by a large iceberg, however, the loss of life that night exceeds all other recorded losses combined. Of course, encounters with much smaller icebergs or ice formations are fairly common. These mostly do little to no damage and go unrecorded.

The monster that tore a huge gash in the right side of the Titanic’s hull that night has recently been estimated by scientists working at Sheffield University in England to have been around 75 million tons. Computer modeling by the team revealed that the iceberg started forming possibly as long ago as 100,000 years on the south west coast of Greenland, even pinpointing it to a place called Qassimiut. The computer modeling takes into account known ocean flow patterns and adds any prevailing wind data from the meteorological records to produce a result. The iceberg would have been formed initially by single snowflakes that over time freeze, compact, and with further snowfall, form into clusters that slowly combine, eventually, the ocean’s tides will break them free of land to begin their journey, eventually melting in relatively warmer waters.

Why was it not seen?

The biggest clue here is in the saying “the tip of the iceberg”, most of this massive block of ice would have been hidden underwater, although, of course, still adding its colossal weight to any impact. The part of the Atlantic in which the Titanic was traveling at the time was known to be treacherous and another ship, the Mesaba, had warned the Titanic that night of ice fields, but these warnings never made their way to the Bridge. The calm sea that night also played a part as the sight of waves breaking against an iceberg is one of the first things spotted by men in the Crows nest specifically looking out for them, especially at night when the white foam of the breaking waves catches the moonlight.

One of the men in the Titanic crow’s nest that night, Frederick Fleet, is reported to have been the first to see it and report it to the Bridge but it was too late, there is some controversy about what happened next, whether the action taken was correct or not. One thing is certain, however, and that is that on impact, the massive block of ice tore open the watertight compartments, carving its way into too many for the Titanic to stay afloat. The ship that received a mayday signal that night, The Carpathia is reported to have had to zigzag on its way to pick up the survivors to avoid ice. Later passing ships have taken photographs of what may or may not have been the iceberg that sunk the Titanic

A human tragedy compounded by mistakes.

In our modern world where health and safety come first, whatever the cost, it is hard to imagine the time a hundred years ago when such things were of secondary importance. For any contemporary observer, it is difficult to conceive of a ship setting sail without sufficient lifeboats for everybody on board, but that is exactly what the Titanic did. The first factor in this was that the British Board of Trade which oversaw such regulations, had failed to keep pace with the technological and engineering advances of the era. It simply had no regulations in place for such a huge vessel.

The number of lifeboats was calculated by the tonnage of the ship. Since the biggest vessel at the time the regulations were made was 10,000 tons which required 16 lifeboats, this was the maximum requirement. The fact that the Titanic was 46,000 tons with 20 lifeboats seemed of no concern at all. Some of the designers working on the Titanic had, to their credit, suggested more lifeboats, but these were waived away in the interests of cost-cutting and even the aesthetics of not having a deck cluttered with lifeboats. Another factor in the disaster was a poorly trained crew and lack of instruction in emergency procedures, especially in the operation of getting the lifeboats safely into the water.

Lessons that needed to be learned.

The scale of the tragedy that night, however, meant that things could no longer be ignored. The public on both sides of the Atlantic demanded action and clamored to know why and how the unsinkable Titanic sank, and why the loss of life was so great. It was agreed that an International Convention for the Safety of Life at Sea (SOLAS) would be set up. It convened on the 12th of November 1913 in London. The convention was finally signed on the 20th of January 1914 but the outbreak of World War 1 meant that its implementation would have to be delayed. The convention concerned itself not only with rules about safety procedures, such as the number of lifejackets and lifeboats that a vessel would require, but also crew training and the formation of an ice patrol by the American Coast Guard in the North Atlantic to keep track and warn about potential danger. Since then, the convention has met in 1929, 1948, 1960, and 1974, with updates on the 1974 convention ongoing.