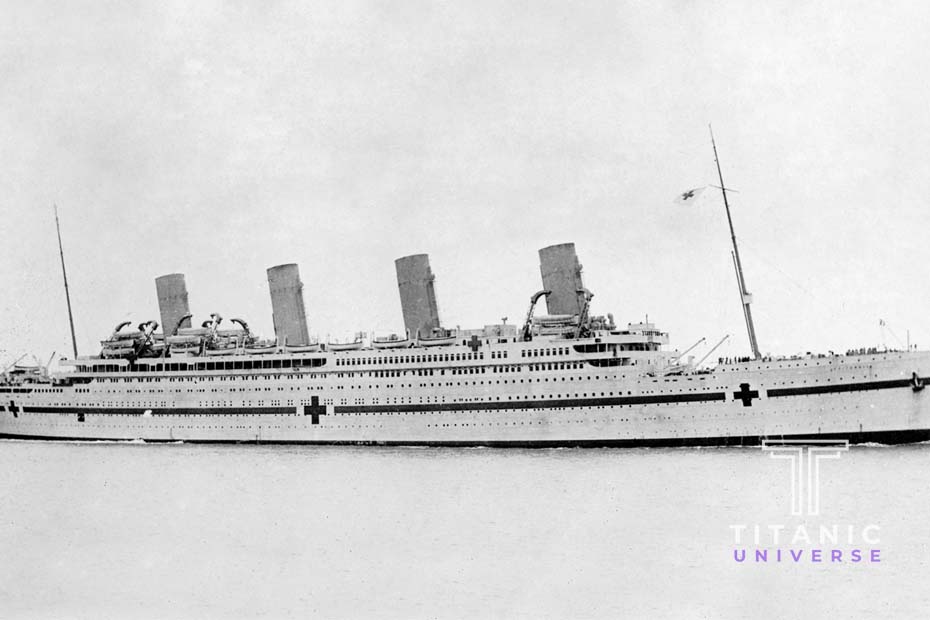 Launched after her more famous sisters, the RMS Titanic and the RMS Olympic, the HMHS Britannic was the third and final Olympic class ship built for the White Star Line.

In response to Cunard’s record-setting luxurious liners, the Lusitania and the Mauretania, White Star Line commissioned the building of their new Olympic class ships. Rather than attempt to compete on speed, the ships were designed to be 50% larger and 100 ft longer than their rivals. They were to be the largest transatlantic ocean liners afloat. Taking lessons learned during the building of the Olympic and Titanic, Britannic was to be the largest and most luxurious of the three, the last word in elegance and luxury. Building Britannic started just over 4 months before the sinking of Titanic, on the 30th of November 1911.

Speculation followed the sinking of Titanic on the 14th of April 1912, that the intended name of the third Olympic class liner was changed from Gigantic to Britannic due to concerns by the White Star Line that similarities between the names would be too off-putting for passengers. The debate continues to this day. Whilst there is evidence for and against this, White Star Line has always denied there was ever any other name intended for her than Britannic.

The order to proceed with “433” is recorded in Harland & Wolff’s order book on the 28th of June 1911 and the name “Britannic” is recorded against it. The fact that this is long before the sinking of the Titanic suggests that any name change was not a result of the tragedy and there is no evidence that the name in the book was changed or added later.

However, on the 24th of July 1911, the New York Times reported information from the crew of the SS Baltic, that the third White Star Line ship would enter service in 1913 and that it would be named Gigantic. This report is later referenced on the 21st of November 1911 in the Las Vegas Optic where the name Gigantic is used repeatedly amid lavish descriptions of her intended size and grandeur, including intended department stores, golf courses, and tennis courts.

Outside of newspaper reports, the only documented proof that Gigantic was ever considered as a name for Britannic is found in documentation from the company that constructed the anchors for the three ships. Under “433” in the Chain & Anchor book of Noah Hingleys on the 20th of February 1912, the name “Gigantic” is listed. This is crossed out and replaced with “Britannic” at some unknown point. The date of this entry suggests that the name Gigantic was considered, and used, before the sinking of the Titanic on the 14th of April 1912.

In an attempt by White Star Lines to restore confidence in its Olympic class ocean liners following the tragedy, changes were made to the design, structure, safety and life-saving equipment carried, not only on Britannic but also her sister ship, Olympic.

When Titanic sank, Britannic had only been in construction for 5 months. Already in service, Olympic returned to Belfast for alterations and safety improvements.

Britannic was given a double hull along the engine and boiler rooms and 6 of her 15 watertight bulkheads were raised from E deck to B to ensure that she would remain afloat if even six compartments flooded. She was re-designed to carry 48 lifeboats, with 46 of them being the largest ever placed on a ship at 34 feet long. Two of these had motor propulsion and wireless communication. Each of the 48 lifeboats could carry 75 people, allowing Britannic’s lifeboats to carry 3,600 people – more than the ship could actually carry!

In a cruel twist, despite all the safety changes implemented following the sinking, Britannic sank three times faster than the Titanic.

A Life of Service

Despite being built to be the largest, most luxurious ocean liner in White Star’s fleet, Britannic never carried a paying passenger and never carried the letters RMS. Launched on the 26th of February 1914 and requisitioned as a hospital ship by the British Government in 1915 following the start of WW1, the luxury fixtures and fittings destined for Britannic were placed in storage and she was fitted out as a hospital ship. First-class dining rooms became operating theaters and wards, whilst B deck became quarters for medical officers and staff.

On the 12th of December 1915, she was ready for war service, and His Majesty’s Hospital Ship (HMHS) Britannic set off on her maiden voyage to Mudros, Greece.

HMHS Britannic undertook three trips to the Mediterranean before being decommissioned in May 1916. Work then began to fit her out as a passenger liner, but before this could be completed, she was recalled to duty and had entered service as a hospital ship again by September of that year. She completed a further two Mediterranean trips before disaster struck on the 21st of November 1916. Hitting a mine off the coast of the island of Kea in the Aegean, Britannic took only 55 minutes to sink. Thankfully due to the increased number of lifeboats carried following the tragedy that befell the Titanic, only around 20 people died of the 1,066 on board. They perished because their lifeboats came too close to Britannic’s still-turning propellers. She was the largest ship lost at sea in WW1.

The wreck of Britannic was discovered in 1975 by Jacques Cousteau, lying 121 meters down, on her starboard side with the remains of mines nearby and a large hole in her bow.

Purchased privately in 1996, the future of Britannic’s wreck looks to be one of restoration and conservation. Talks are underway about the retrieval of artifacts for conservation, mapping of the wreck, and the possibility of a long term study, in their individual environments, of her and her sister ship, Titanic, by marine archaeologists, microbiologists, and engineers.