Titanic Hauntings: Ghosts of the Sea

On the clear, frigid morning of April 15th, 1912, the R.M.S. Titanic sank into the waters of the North Atlantic after striking an iceberg several hours earlier. Of the 2,208 souls aboard, only 709 would survive the sinking. Today, Titanic’s legacy lives on in both fact and myth, but some of the most chilling stories lie in tales of its hauntings, where the restless spirits of those who died are rumored to occupy graveyards, artifacts, and even the site of the sinking itself. Do those who perished so tragically continue to haunt these connections to the famed ocean liner? Whispers and wild tales continue to circulate, and it seems as if these ghosts of the sea are not content to rest. 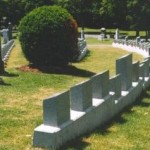 After the sinking, many of the recovered bodies were buried in a number of cemeteries in Halifax, Nova Scotia. The majority of the bodies were interred in the Fairview Lawn Cemetery, with over forty of the bodies unidentified and buried under simple granite markers. These somber graves of the unknown passengers are said to be haunted, with some paranormal experts describing a sense of heaviness that may be the presence of unquiet spirits. It stands to reason that this section of the cemetery would be full of restless ghosts, as the lives of these people were taken so quickly and tragically on the night of the sinking.

2. The Five Fisherman Restaurant and Grill

Some say the ghosts of Titanic victims abound at the Five Fisherman Restaurant and Grill. This four-story building opened in 1816, first as a schoolhouse; however, later on, it was purchased by a family who turned it into a mortuary. When the bodies of some of the Titanic victims were recovered, they were brought to this building and held there until the burials could take place. Today, the building is a popular eatery, but employees and diners alike have experienced odd happenings there. 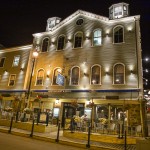 Employees of the restaurant tell stories of silverware rearranging itself once tables are set, eerie voices coming from rooms after dark, and shadowy figures glimpsed in the kitchen. Diners have had text messages changed after sending them, and in once terrifying instance, one recipient of a text sent from a table in the restaurant received the message, “DEATH” instead of the original text.

These eerie incidents must surely be the acts of the unquiet spirits that remain where their earthly remains were brought after the sinking.

The Titanic Exhibit in Las Vegas’ Luxor Hotel and Casino has its fair share of ghost stories. The most popular is the Lady of the Grand Staircase, who has been spotted at the replica staircase by more than one person. Photographers and guests alike have seen this apparition, clothed in a black period dress. It is said that she appears and vanishes without warning and never speaks. 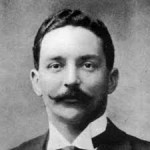 Other tales from the Luxor Exhibit include the ghostly vandalism of a portrait of Bruce Ismay, one of the designers of Titanic. When the ship began to sink, Ismay abandoned her and boarded a lifeboat instead of helping others find their way to safety. Luxor employees say that the ghosts of those Ismay left to their deaths shake his portrait off the walls at night, letting everyone know they haven’t forgotten Ismay’s betrayal.

If any Titanic-related locale is haunted, it must be the place where so many people lost their lives on that fateful night in the middle of the North Atlantic. Those who have visited the site since have confirmed ghostly activities, including odd, glowing lights visible at night that are said to be the spirits of those who died in the water. Deep-sea vessels that have explored the area near the sinking have reported receiving eerie, faint S.O.S. calls that fade in and out and seem to have no traceable source. Are these the ghosts of the sea, calling out from the past, or just the result of some sailor’s overactive imagination? Perhaps the mystery will never be solved, but one thing is for sure: there is an ocean of unrest surrounding the spot where Titanic sank forever from sight.

No one can be certain what lies beyond this life, but if these stories of Titanic hauntings are to be believed, then those who lost their lives on the morning of April 15th, 1912, have never found their way to eternal peace. It could be that they will vanish when the ship itself is finally consumed by the ocean, but until then, these ghosts of the sea will continue to fascinate and frighten those who see them.