Beyond the Bow: Three Surprising First-Class Amenities of the Titanic

Most people know the story of the RMS Titanic and how it and many of its passengers met a tragic end in the North Atlantic on the chilly morning of April 15th, 1912 after the grand ocean liner struck an iceberg. Many also know that Titanic was known for its opulence, but what truly made this amazing ship so luxurious? From its fine rooms on the first-class decks to a varied daily menu, those who held a first-class ticket were treated to the very best. However, these privileged passengers also had access to three amazing amenities that may surprise even the most enthusiastic Titanic buff. 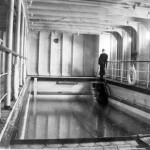 First-class passengers aboard the RMS Titanic were probably delighted to learn that they would have exclusive access to the ship’s swimming pool, which was also called the swimming bath.  The pool wasn’t very large at thirty feet long and fourteen feet wide, but for its time, it was considered quite luxurious. The salt water was heated and had a depth of approximately six feet, which made for a fine swimming experience for those who used it. One first-class passenger, Colonel Archibald Gracie, who survived the sinking, used Titanic’s pool on the morning of the ship’s last day at sea and described it as “refreshing.” He added that he would have returned to use it again the next day if not for the tragedy that befell the ship that same evening.

In order to access the pool, passengers would have to buy a ticket from the ship’s Enquiry Office. The pool itself was located on F deck, on Titanic’s starboard side. Use of the pool was free in the mornings and open only to men after 2 p.m. For the cost of a quarter, passengers got unlimited use of the pool, its changing room, and even a rented swimsuit. This amenity alone made Titanic one of the most luxurious ships of its time. 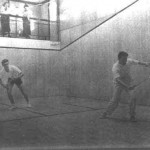 Titanic’s designers must have had the first-class passengers’ health and entertainment needs in the forefront of their minds, as it included both a gym and a squash court. The squash court was more opulent an amenity than the pool in several ways. Firstly, it cost twice as much to reserve the court than the cost of using the pool at peak hours, and it included an observation deck where the players’ friends and family could watch and cheer them on. A squash instructor was on hand at all times to instruct and guide those who were not familiar with the game.

The squash court was on G deck, with the observation deck located on F deck. It isn’t clear how many people took advantage of the court before the Titanic met its fate, but it was one of the first of the grand amenities to flood soon after the ship struck the iceberg. 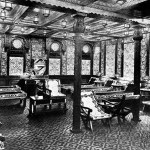 Titanic’s Turkish bath is one of the most little-known amenities that existed on board, perhaps because this style of bath is not as in fashion now as it was during the Victorian and Edwardian era. At the time, a Turkish bath was very much in vogue and considered to be healthy and restorative. This room, which included a Moroccan décor and a fresh-water drinking fountain, cost $1.00 per person, and the price could be combined with use of the pool, which was located directly behind it on F deck.

The Turkish bath had staff on hand during its operating hours, and these stewards provided passengers with whatever they might require, from fresh towels to assistance with operating the equipment. The baths contained a variety of rooms, from those with steam features to temperate and shampooing rooms, where passengers could refresh themselves after a steam. The drinking fountain was one of the most impressive features of the Turkish bath, as it was made of marble to add to the overall grand feel of the room.

Titanic’s first-class passengers were offered the best of everything, as the designers of the great ship created her to be the most luxurious ocean liner of her time. From the finest meals to a private pool and the best of exercise amenities, it is interesting to consider what other types of plush perks might have eventually been added to Titanic if she hadn’t sunk on her maiden voyage.