From Jack to Rose and Beyond: Titanic Halloween Costume Ideas 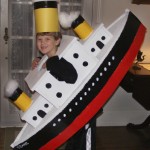 Halloween is fast approaching, and dressing up in fun and exciting costumes isn’t just for children anymore. In fact, reports show that adults are spending more than ever on lavish Halloween costumes, and that nearly half of them dress up each year. Whether it’s nostalgia, to satisfy the urge to cosplay, or to fuel the creative side, adult Halloween costumes are more popular than ever. Costumes based on movie characters can help you let your inner kid out to play, and if you’re a fan of James Cameron’s Titanic, there are a variety of costumes you can put together that will truly make you feel the part, whether you’re headed out to a Halloween bash or want to dress up along with your kids for a night of trick or treating.

Jack Dawson and Rose Dewitt-Bukater are the romantic and tragic threads that tie the story of Titanic together, and their outfits are among the most popular Halloween costumes for those who want to look the part. One advantage to dressing up as Jack is that his look is quite simple to put together. Rose wore a variety of gorgeous dresses and robes throughout the movie, which means you can pick one that best suits your budget or creative skills. 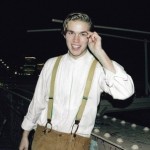 If you have sewing skills or enjoy creating costumes from scratch, there are many Titanic-themed dress patterns available online, and you can also pick up a few hints and tips about where to find the most affordable accessories to complement your costume. Depending on the look you choose, you may want to give yourself plenty of time to put an outfit together. For example, if you love Rose’s red evening gown from the scene where Jack saves her from falling overboard, creating this dress would be more time consuming than creating simpler looks, such as the dress she wears during the ship’s sinking.

2. Creating a Titanic Costume On a Budget

While the Titanic film had the advantage of a million-dollar costume budget, spending money on dressing up your kids or shelling out cash to throw a Halloween party might mean your own costume budget is limited. However, this doesn’t mean you have to settle for a cheap outfit. Here are a few ways to find clothing, shoes, and accessories that won’t put a huge dent in your wallet: 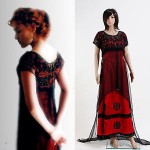 Keep in mind that thinking creatively can help you save money on your costume, so don’t be afraid to alter your finds. Hemming, a hot glue gun, and some iron-on accessories can turn something mundane into something you’ll be proud to wear.

3. Beyond Jack and Rose

Titanic premiered in theaters twenty years ago this December, but Halloween costumes based on its characters are still popular. Perhaps one of the reasons is because there are so many different character looks to choose from, thanks to the diversity of the film’s cast. From the Unsinkable Molly Brown to Captain Smith to minor characters like Tommy or Fabrizio, there are many different looks you can create. If you already own a tux, pop it on, slick your hair back, and voila, you’re Cal Hockley. If you prefer playing the villain to the hero, a smart but simple suit and a man’s grey wig can transform you into Spicer Lovejoy, Cal’s valet and right-hand man. With so many different characters to choose from, you’re sure to find one to suit your taste and budget.

James Cameron’s Titanic fires the imaginations of people all over the world, especially when it comes to recreating the film’s amazing costumes. If you’re ready to create your own Titanic look for Halloween this year, remember that a little creativity, planning, and ingenuity can go a long way in making a night to remember.