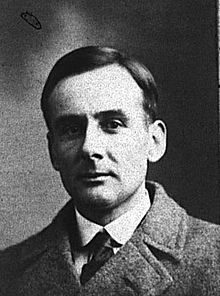 Anyone that has seen the movie, A Night To Remember saw a paragraph that talked about the fact that Joseph Boxhall, along with many of the survivors, that spoke to Walter Lord, and helped him write what is considered to be one of the best books ever about the RMS Titanic. After the book was done, the A Night To Remember movie came out, and it really opened the eyes of the public about what happened on the world’s biggest ship back in 1912. At the time, Joseph Boxhall was the Titanic’s 4th officer, but he survived the disaster, and he helped Walter Lord tell the tale of that terrible night.

The Birth of Joseph Groves Boxhall

Joseph Groves Boxhall  was born on March 23, 1884 in Hull, which is just outside of Yorkshire, England.  He was the second child of a sea captain, and his name was Joseph Boxhall, Sr.  Like so many other sailors at sea, Boxhall was born into the tradition of the men in the family having a life at sea.  When Boxhall was a young lad of 15, it was his turn to go to sea, and he hopped on board a Liverpool ship that belonged to the William Thomas Line. For the next four years, Boxhall traveled, learning all he could about the sea.  In 1903, Boxhall then left the William Thomas Line and went to work in the same Line that his father was in, the Wilson Line.  By 1907, Boxhall had achieved two certificates, the Master’s and the Extra-Master’s. With this two certificates, Boxhall then left the Wilson Line and joined the White Star Line.  At the same time that Boxhall was with White Star, he was also a sub-lieutenant in the Royal Naval Reserve.  The first ship that Boxhall was associated with was the Oceanic, he then moved to the Arabic, and when the most  famous White Star Line ship was ready, Boxhall then was transferred to the RMS Titanic at the age of 28. 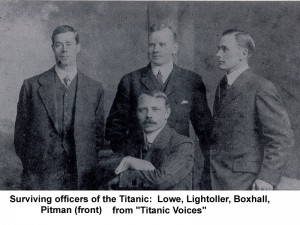 Boxhall began serving on the RMS Titanic on March 26, 1912, and he got on board her at Belfast, Ireland.  Like the other officers on board the Titanic, Boxhall had to do things to prepare the ship for her maiden voyage that was only a little over two weeks away.  On April 10, 1912, the Titanic left Southampton and headed for her first destination, Cherbourg, France. The duties that Boxhall had were things like helping with the schedule of when other officers went on duty, assisting the bridge officer with navigation, and also helping take care of the passengers if the need arose.  Four days into the voyage, when the Titanic collided with the iceberg, Boxhall was not on the bridge, but the sound of the three bells from the crow’s nest sent him racing to the bridge to see what was going on.  The young 4th officer got to the bridge just after the ship hit the iceberg, and Captain Smith ordered him to go explore the ship to see if there was any damage. Unfortunately, Boxhall did not go down far enough, and he saw nothing wrong, but by the time he got back to the bridge to report that things were fine, there were reports coming in about different parts of the Titanic filling full of water like the mailroom, which was forward of the ship and right in the collision zone.  Once Thomas Andrews confirmed that there was not a lot of time before the Titanic sank, it was Boxhall who worked out the position that was then given to the wireless operators.  Boxhall was instrumental the night the Titanic sank because he was also the one that spotted the lights of a nearby ship, which is why Captain Smith ordered the rockets to be fired and for the Morse lamp to be used.

Boxhall escaped the sinking Titanic at 1:45 when he was placed in charge of lifeboat number 2. The lifeboat could hole up to 40 people, but there were only 18 in it, and the moment the boat hit the water, Boxhall had its occupants row away because he was afraid of the Titanic having suction and pulling the boat down with it.  By 4:00 am, the Carpathia was close by, and Boxhall used a green flare to get the ship’s attention and helped guide her to the Titanic’s survivors floating in the small fleet of lifeboats.