Harland and Wolff: The End of a Shipbuilding Giant 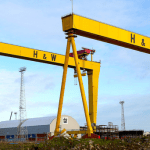 Belfast, Ireland, has always been a haven for shipbuilding. Toward the start of the 20th century, this industry was booming and the greatest shipyard of them all, Harland and Wolff, was turning out ships like the famed (and doomed) R.M.S. Titanic. At one point, this business employed a huge number of people who lived in the city, and the shipyard covered over 300 acres of land. When construction on Titanic began in March of 1909, it was to be the yard’s crowning achievement and the largest ship ever built by human hands. However, Harland and Wolff is likely seeing its final days in business and is now up for sale, a sad decline from being one of the grandest ship-building organizations to have ever existed.

Although the shipyard was already doing business in the mid-19th century, it did not become Harland and Wolff until 1861, when ship merchants Edward Harland and Gustav Wolff partnered to tap into the world’s richest clientele. By the end of the century, Harland and Wolff had obtained a contract with the White Star Line to build a series of ships that would hold the world in awe. These ships, which were known as the Olympic class, would include three vessels: The Olympic, Titanic, and Britannic. The Olympic was constructed first, in 1909, but when Thomas Andrews and Bruce Ismay joined forces to create Titanic, they envisioned a ship that was grander, more luxurious, and larger than any other ship to ever grace the Atlantic. 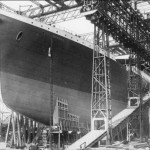 When Titanic was launched on her maiden journey in April of 1912, it was a moment of crowning glory for Harland and Wolff. The ship was a marvel of modern shipbuilding and no other vessel came close to her size. Sadly, this triumph would be short lived, as Titanic would strike an iceberg on the evening of April 14th and sink beneath the freezing waters of the North Atlantic in the early hours of the 15th, taking over 1,500 lives of men, women, and children. Many blamed Ismay, who survived the tragedy, who pushed the ship’s captain, E.J. Smith, to increase speed and did not allow for enough lifeboats to be put on board.

While the sinking of Titanic was a terrible loss for the White Star line, the Harland and Wolff shipyard would continue to construct ships, and over 70 vessels would launch out of the yard during the early 20th century. The yard likely avoided a black eye because it was the ship’s designers, not her builders, who were blamed for the lives lost. However, despite the yard’s success and the vast number of people it employed, a decline in the industry would soon impact Harland and Wolff in a way that would make it difficult to recover.

By the 1950s, Harland and Wolff faced stiff competition from China, as the nation grabbed the lion’s share of the industry at the end of World War II. South Korea began its own shipbuilding industry at the same time, giving clients a choice when it came to cost and design. The Belfast shipyard saw the decline that began in the 1950s increase, and this trend would continue into the 2000s. 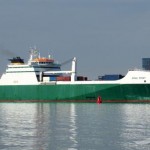 By 2000, the Harland and Wolff shipyard was building very few ships and had cut its staff considerably. In 2003, it launched what would be its last vessel, the MV Anvil Point. The majority of the world’s ships were still being built in Asia and in other parts of Europe. By 2005, the company would try to target other businesses to survive, including sustainable energy sources and the construction and repair of offshore facilities. Today, Harland and Wolff employs about 115 people, and most of the buildings in the yard are not in use. In January of 2018, a large storm tore a section of roof off one of the factory facilities; fortunately, no one was inside at the time.

The future of Harland and Wolff is in serious doubt as Harland & Wolff, as it is now for sale as the yard’s Norwegian parent company, Fred Olsen, is attempting to restructure its holdings. While this may spell the end of the shipyard, one fact is for certain: its place in shipbuilding history and lore is well secured.