Weak Rivets Might Have Caused the Titanic to Sink

Recent in-depth research into the sinking of the Titanic has discovered that faulty rivets may have been the main cause for the ship’s demise. It has been found out that builders of the Titanic were incredibly short on rivets and skilled riveters and had to ultimately settle for faulty materials in order to complete the project on time. Scientists believe that with the right quality of materials and skilled workers that the Titanic may have been able to withstand the impact of the iceberg without sinking into the Atlantic.

Scientists have recently recovered documents that tell tales of inferior metal used for riveting and less than skilled workers hired to install them. A modern marvel of her time, the Titanic was the largest passenger ship ever built, but it may have been far from the best constructed. Many documents have uncovered that much low quality slag metal was used in building the rivets in the Titanic. This type of metal does not hold its integrity as well in cold waters and become very brittle at extreme cold. 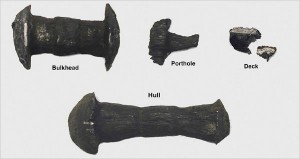 Archives found in regards to the Harland Wolff company of Ireland that was responsible for the Titanic construction states that over three million rivets needed to be used in order to construct the Titanic. Acting as the glue that holds the ship together, the archives also state that there was a shortage of riveters and the necessary materials to produce high quality rivets.

The archives also uncovered that there was indeed a lack of skilled riveters that were needed to complete the project. An incredibly difficult task to achieve, the rivets needed to be heated to the perfect temperature and put into place with the right number of consistent hammer strikes. Of course if the final result looked decent on the outside, shoddy craftsmanship could be easily hidden.

Only on the central hull of the  ship were steel rivets used; other areas such as the stern and the bow used weaker iron rivets to hold them together. This is a mistake that would lead to tragedy in the end as the iceberg struck the bow of the Titanic. Scientists and engineers believe that with strong rivets and better craftsmanship that the Titanic could have stayed afloat long enough for rescue to arrive and may have saved many lives.

Harland Wolff has denied these accusations saying that the sister ship of the Titanic named the Brittanic sailed for 24 years without incident and was made from the same material. Recent findings have also compared the amount of slag found in the rivets of the Titanic and compared them with ones in the Brooklyn Bridge and found that they were nearly three times more.

The story has captivated scientists for nearly 100 years and new evidence leads many to believe that the ship that was designed to be ‘unsinkable’ was the product of unskilled labor and incredibly low quality metal used to hold it together. This information brings new light to the Titanic wreck and might help explain why the Titanic sank.