Titanic the Musical – A Great Show is Back on Broadway 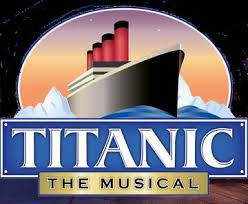 In 1997, after Titanic came out, the world caught Titanic fever because the movie was such a huge success and was on the top of the box office for a record number of weeks, which was 14. No other movie in history has ever been at the top of the box office for 14 straight weeks, and it is highly unlikely any other will.  For those 14 weeks, the stars of the Titanic movie were on magazine covers, there were specials about the ship that were created, and one thing that was also created was Titanic: The Musical.

Both Positive and Negative Press About the Titanic Movie 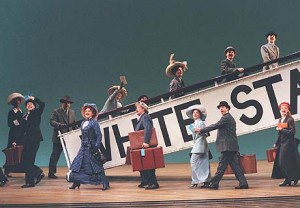 For the whole year of 1997, there were articles every day practically about the Titanic movie mostly because of the fact it had the biggest budget for a move ever, which was around $200 million dollars.  The news that was coming up was about the huge budget, and how everyone was predicting that a movie with such a huge budget could never make enough money to be a hit. Every movie critic was predicting that the 1997 Titanic movie would be a huge failure because the release date had not been decided upon yet, and there were a few other production problems due to the fact the CGI people had to recreate a huge ship both on a set and in the world of computers.  However, despite all the negative press, there was just as much positive press because everyone could not wait to see what James Cameron could do.

An Inspiring Musical About the Famous Doomed Ship 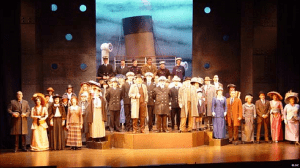 Titanic fever was in the air, and there had not been so much buzz about it since 1912 when the ship sank, but once the 1997 Titanic movie came out, all the world suddenly remembered the great rusting hulk on the bottom of the ocean floor.  Two men felt that the time was right for there to be a musical about the RMS Titanic, and those two men named Pete Stone and Maury Yeston set to work not only writing the story itself, but also the technical taste of sinking a ship on a stage in front of a few hundred people. 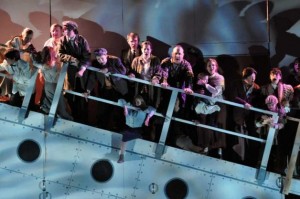 When Titanic: The Musical first premiered, there were a few technical problems, which basically meant that the ship was not sinking on stage like it was supposed to. However, the idea of a recreating a sinking ship was a bit of a challenge, but a few weeks into production, the technical problems were solved.  While the public and critics were split on whether the Titanic musical was any good, the tickets sales were respectable, and the musical ran for over 2 years.  After 1999, the Broadway production closed, and then Titanic: The Musical went on the road. This was not the first Titanic tour that existed, there were also several European tours that began in 2001. There were Titanic: The Musical tours in Amsterdam, Germany, France, Ireland, Canada, Australia, and there was even a Japanese tour that took place in 2007 that just ran for one month.  The last time that the musical was performed was in 2010, but that is about to change, and people who did not get to see Titanic: The Musical the first time are going to get a second chance. Now in 2014, the musical is coming back to Broadway, and is expected to make its debut sometimes this fall. However, before Broadway, Titanic: The Musical will first premiere in Toronto, Canada for a six week engagement that will last from July 22nd all the way until August 31st. 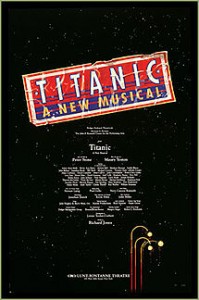 When the Tony Awards were held in 1997, Titanic: The Musical ended up winning 5 Tony awards including Best Musical, Best Book of a Musical, Best Original Score, Best Scenic Design, and Best Orchestrations.

The world had Titanic fever in 1997 when everyone was waiting for James Cameron’s Titanic to be released. Two men named  Pete Stone and Maury Yeston decided to take advantage of all the people that wanted to get all they could of Titanic, and decided to create a musical. Titanic: The Musical was pretty successful and ran for over two years before the production went on a road tour. Now, in 2014, Titanic: The Musical is coming back to Broadway, which will be exciting for all of those people that loved it the first time or for those that missed its 1997 to 1999 run. Hopefully, this revival of Titanic: The Musical will be just as successful in its second run as it was in its first.