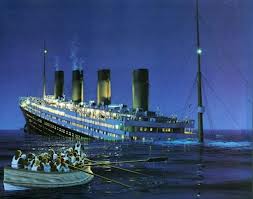 In 1912, when the RMS Titanic sank beneath the still waters of the North Atlantic, there were 705 people safe and sound in 19 lifeboats watching everything happen.  When the Titanic inquiries took place in both America and England, some of the survivors had to testify as to what they saw, but no two accounts of how the ship sank. Some people saw the Titanic break in two pieces, but the senior surviving officer, Second Officer Charles Lightoller said that he saw the ship sink whole, and given his rank, he was believed more than the passengers were.

Lightoller was not the only person to have claimed that Titanic sank intact, but his word was taken above everyone else, and even when J. Brice Ismay took the stand, he claimed that he sat in the lifeboat and turned away as Titanic sank to the bottom of the ocean. Ismay was already in shock over the fact the ship he spent so much time and money on was doomed after just four days at sea. Other than Lightoller being the most believed Titanic sinking witness, there were other people that were very adamant about facts of the sinking, and one passenger, Jack Thayer, a 17 year-old, even had a crew member from the Carpathia create a drawing for him of what he saw that night.  According to the drawing Jack Thayer had done, the Titanic broke almost in half, then the bow section is seen disappearing beneath the water. The drawing shows Titanic’s stern section floating by itself for several moments, and then it too slides beneath the water. Eva Hart, who was only seven at the time of the Titanic disaster, and who survived with her mother, also claimed that she saw the Titanic break into two different pieces. Another survivor, Ruth Becker, also saw the ship break up, but once again, the words of these two survivors was ignored.

In 1985, ocean explorer Bob Ballard, and a team of French explorers, were able to find the RMS Titanic, and when he went down to the bottom of the ocean, he was shocked to discover that all of those survivors were right, and the Titanic was indeed lying on the bottom of the North Atlantic in two distinct pieces. The bow and the stern of Titanic were almost half a mile apart, and between the two sections was debris that clearly shown that the big ship had to break on the surface before she sank, and everything inside the massive liner had spilled out of the ship then slowly drifted to the ocean floor.  Once Bob Ballard got back to land, he held a press conference to announce his finding, especially the part about the Titanic having split in two as she sank.

There were so many questions about Titanic’s sinking that a team of experts, including James Cameron, got together to do a thorough analysis of Titanic and her debris field. No one went down to look at the rusting ship, but instead they used very powerful sonar, HD equipment, and 3-D imaging to map out the whole debris field. The experts found plenty of missing parts of the ships that were gone, which was mostly the middle section that everyone had mistakenly thought had disintegrated when the Titanic broke apart.  The team of experts also sat around a giant table and figured out exactly how Titanic sank, and the sinking video is available for those that want to see it. Though James Cameron did not have all the information at the time when he made the 1997 Titanic movie, his own depiction of Titanic sinking was not that far off from what truly happened. Here is the Titanic sinking video that was created using the team of experts, and evidence that they gathered from the bottom of the ocean.

Though James Cameron, and his group of experts, put together this sinking video, it is clear that there are still many more mysteries to solve regarding Titanic. The experts that put the sinking video together still have a lot of data to analyze, and they will be going over things for years to come, and maybe one day, Titanic historians and enthusiasts will get the answers they are looking for in regard to the RMS Titanic.