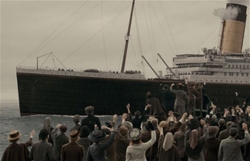 This moving poem was sent to me by Frank O’Brien, from Cobh (Queenstown)! We’re excited to be able to feature it on TitanicUniverse.com. Enjoy, and let us know what you think!

Lay still Majestic Lady, in your slumber beneath the deep
Hold close those there with you, as they sleep their eternal sleep
Many long years have now passed since you graced these shores and isles
When many hearts went with you, full of tears, hopes and smiles

On an April tide, from Belfast with pride, you set to the open sea
With trials all done and approval won, the dream now reality
At Southampton and at Cherbourg, you were met with great fanfare
The Press all hailed, on each day you sailed, there was magic in the air 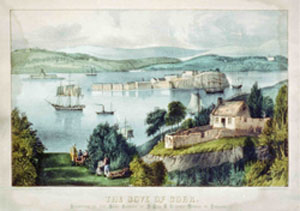 Your last port of call was Queenstown, that is the cove of Cork
Where more souls had joined you, all bound for the great New York
With all aboard, safe and secured, crew made their final check
A lone piper played Erin’s Lament, out on the afterdeck

With pilot paid and anchor weighed, you set your course due west
You mighty ship, so well equipped, the biggest and the best
Day and night, night and day, you sailed so proudly on
With much refrain to entertain, merriment and song

Then on that fateful night, when all was still, there came an icy thief
To steal your heart, tear you apart, bring mayhem, loss and grief
Anguished cries and sad goodbyes were heard both far and near
With many lost and many saved, on that dreadful night of fear 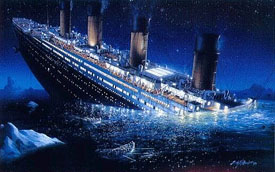 With boilers down and engines stopped, your props so very still
‘Neath the swirling surf you gave it up, in the early morning chill
Now sea birds cry their last goodbye, from sea to ship to shore
Their sad lament is a message sent, that you will sail no more

At Pier 59, longshoremen stand in line, down on Upper Bay
They await the great arrival, but it will not come today
Nor will it come tomorrow, not now or evermore,
For it has reached its’ destination, on a far off lonely shore

Lay still Titanic Lady, in your slumber beneath the deep
Where guarding angels hover o’er thee, a vigil there to keep.