Titanic Iceberg – Information About the Iceberg that Sank the Titanic 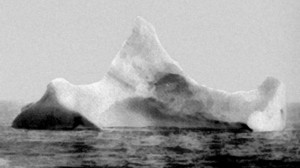 On April 14,1912, the world was shook to its very core when news reached New York City that something completely unthinkable had happened.  The news came in via telegraph that the biggest ship in the world, the unsinkable ship, the RMS Titanic had struck an iceberg, had sunk, and over 1500 out of 2200 passengers were now dead.  Everyone who heard the shocking news could only think of one thing: How could something so horrible have happened? How could something unsinkable, and made by the hand of man, now be gone?  Once the world settled down from the shock, there were a million questions, and one was, what happened to the iceberg that struck the Titanic?

The Beginnings of the Iceberg That Struck the Titanic

Though it may sound like a silly question, people may see pictures of giant icebergs floating in the ocean and wonder just where an iceberg comes from.  The story of how an iceberg is created is actually quite simple because an iceberg is actually snow that has been building up for thousands of years. Every iceberg comes from a single snowflake, and after the millions of years, the snow becomes compressed into one massive iceberg. After a certain amount of time, that iceberg breaks off from a glacier, and then it becomes adrift in the ocean.  Over 85 percent of the icebergs that are floating around in the ocean right now are from the coast of Greenland where the ice fjords are located.  Scientists estimated that one snowflake landed in Greenland, and then over the course of the next 15 to 20 thousand years, it formed into the gigantic iceberg that more than likely sank the Titanic.  It is also estimated that the iceberg that Titanic struck probably broke off from the coast of Greenland around 1909, and then spent the next three years in the ocean.

The Iceberg Adrift In the Ocean

As the iceberg was drifting along in the ocean, many things were happening to it. When the original iceberg came away from the coast of Greenland, the size of it was a probably bigger than a state in the United States.  Once the iceberg is in the ocean, it is going to immediately change. Remember, the temperature in Greenland was probably well below freezing, which kept it frozen solid into one big massive shape.  However, once in the ocean, the temperature, and the salt content of the water, is going to have a vast effect on the iceberg itself.

The water is going to be higher temperature than where the iceberg came from, so the first thing that will happen is the iceberg is going to start to melt. The iceberg was probably a few miles long, but now, with the salt water, and the warmer water and air, the iceberg is going to start to fall off in large chunks.  Over the course of the next year, the gigantic iceberg has now reduced in size by at least 40 to 50 percent.  By late 1911 or early 1912, the iceberg finally reached the Labrador current, and began drifting right into the North Atlantic shopping lanes where it had a date with destiny, and an equally massive ship named the RMS Titanic.

The End of the Massive Iceberg

After the iceberg struck the RMS Titanic, the massive collision would have had an effect on it. The Titanic was going anywhere from 20 to 25 miles per hour at the time of the collision, which is like a car slamming into a brick wall. While the iceberg did remain mostly intact from the crash, there were large chunks of it were scattered along the Titanic’s bow.  There were many photographs of icebergs that were in the area after the Titanic sank, and there was one that had a red stain along its base, which is the color that the Titanic was painted below the waterline.  However, because of the currents and ship impact, the damaged iceberg was now headed toward the United States, and its own death because of the warm water.  Within a two to three week period, the mighty chunk of glacier that broke off, and became an iceberg, that collided with a ship known as the RMS Titanic, finally broke apart, and sank into the ocean where it dissolved completely.