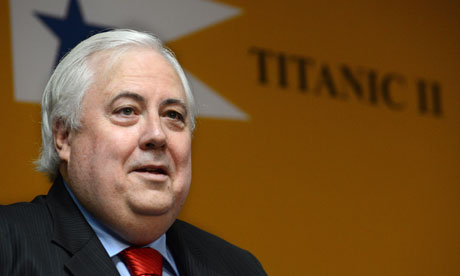 Bigger, better, more modern, and hopefully not the subject of a future historical disaster, Titanic 2 (the ship, not the movie!) is currently in the planning stages. The man behind the project is an Australian man by the name of Clive Palmer, who intends to build a 21st century replica of the vessel that will depart from Southampton, England and sail to New York by the end of 2016. This will be the first of a fleet of luxury liners being built by the Nanjing-based CSC Jinling Shipyard.

Palmer, a Gold Coast businessman, has invested in past endeavors that include golf courses, hotels, coal and iron-ore, nickel smelting, soccer, and even a horse stud. He plans to move to a cruise market where ships generally cost $500 million to build. This ambitious move will take Palmer into an area of commerce where he has no experience, in hopes of building the most recognizable cruise ship since the original Titanic.  It’s nice having loads of extra money lying around, no?

Commissioned by the White Star Line, the original Titanic was the largest vessel of its time at 270 meters (880 feet) long and 53 meters (174 feet) tall. Like its predecessor, Titanic 2 will be absolutely massive (think: Death Star massive). Scheduled to be the largest active liner in the world, the new Titanic will feature 840 room spanning 9 decks.

The ship will be built using 21st century technology, top-of-the-line safety and navigation systems, as well as the requisite gymnasiums and swimming pools. 58 year old Palmer unveiled the plans for Titanic 2 just before a separate announcement that he would run against Australian Treasurer Wayne Swan (aka “The Swan Man”) in his seat of Lilley at next year’s federal election.

The huge undertaking of bringing to life the Titanic 2 is one that may hit a few snags along the way. The Chinese company CSC Jinling Shipyard has been contracted to build her. Many think it may be a challenge in an industry largely dominated by European shipbuilders. Some Chinese analysts worry that the transition from bulk ships used for carrying coal (something the Chinese are very good at building) to a cruise liner at this scale may even be too difficult for the shipyard to finish on time. Palmer expressed that with the assistance of his funding, he can help the Chinese move to the next level in luxury ship-building.

Sailing under the company name Blue Star Line (sounds vaguely familiar!), the Chinese military will be invited to escort the ship during its maiden voyage. Registered on April 18, Blue Star Line lists Palmer and Derek Payne as the only officers, as put forth in the three page filing. In Palmer’s eyes, the replica of the Titanic will be a testament to those who served and lost their lives during the sinking of the ship.

“These people produced work that is still marvelled at more than 100 years later and we want that spirit to go on for another 100 years,” he said.

Aimed at paying tribute to the original Titanic as well as helping China become a player in the shipbuilding industry, it is still not determined how much this project will cost. If this project comes to fruition it stands to be one of the largest cruise investment in years and a momentous event in the timeline of the Titanic.

In addition to Clive Palmer the man behind Titanic 2, there is Clive Palmer the businessman. One of the wealthiest men in Australia, Palmer accumulated most of his wealth in real estate and mining, as well as a few other endeavors. His announcement came in a conference soon after he announced that he would be running in next year’s parliamentary election. He accused his opponent Wayne Swan of believing in the redistribution of wealth in order to shrink the economy.

This is Palmer’s second intervention in politics of late following an instance where he accused the CIA of being behind mining attacks in Australia. He believes that the attacks were designed to make the US coal industry more competitive on a global scale.