The Titanic Inquest: A Maritime Trial of the Century 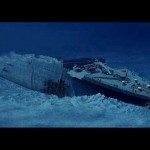 When Titanic struck an iceberg late in the evening of April 14th, 1912 and sank into the icy North Atlantic waters just a few short hours later, it became one of the most sensationalized maritime tragedies in history. However, while much is known about the sinking and the tragic deaths of over 1,500 passengers and crew who lost their lives that night, what is less often discussed are the events that took place after the sinking. One such event, the American Titanic inquest, shed light on the events that happened that evening out at sea, who might have been responsible, and eventually paved the way for new maritime practices that strove to prevent another tragedy like Titanic from ever happening again.

When news of the Titanic sinking reached America, Michigan senator William Alden Smith,  who had an interest in safety standards in the transport sector, decided that an inquest into Titanic could further what he saw as much-needed changes to maritime safety practices. Since the surviving passengers and crew would arrive in New York City within the next few days, Smith wanted to gather them together for the inquest; however, President Taft had little interest in holding a hearing, Smith moved forward with his plans anyway and was then supported by the president after all, who had learned that his military advisor, Archibald Butt, had died aboard Titanic. Once Carpathia docked, Bruce J. Ismay and others were served with subpoenas to attend the inquest.

The Titanic inquest began on May 19th, just four days after the sinking, at the Waldorf-Astoria Hotel. Bruce J. Ismay was the first to be questioned, and because many had seen his abandoning of the ship as an act of cowardice, he was made into something of a scapegoat. However, he was ultimately freed from blame by the committee, as it could not be proven that he urged Captain Smith to increase the ship’s speed.

Over the next few days, surviving crew members, including wireless operator Harold Bride and Charles Lightoller, second in command of Titanic, were questioned about what they did and saw during the sinking. Some of the accounts were quite shocking, such as how a young crewman tried to steal Bride’s life-jacket as he and his friend, Jack Phillips, were ready to leave the wireless station. The two subdued the other crewman and were able to leave the area, but sadly, Phillips did not survive the sinking. 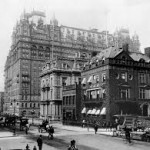 While the sinking of Titanic was eventually ruled to be an act of God and that no one person was responsible, the inquest committee did find that the Titanic’s crew was grossly under prepared to deal with a disaster and that a lack of lifeboats and preparedness contributed to the major loss of life. The committee also found that Captain Smith had blatantly ignored ice warnings from other ships; however, since Smith had died in the sinking, there was really no way to prosecute him.

While the hearing did result in several new United States maritime laws meant to save lives, such as the constant monitoring of sea-going vessels meant to avert tragedy, many British citizens were outraged by William Alden Smith’s perceived audacity at the “grilling” of their patriots and felt that he had no right to question them, since Titanic hailed from Southampton, not a U.S. port. Some also felt that Smith had humiliated and badgered passengers who were still grieving and traumatized from the disaster, and that the senator’s only goal was to humiliate Britain. As one might imagine, the reaction in the United States was largely a popular one and Smith was applauded for his tenacity.

When Titanic sank on that cold morning of April 15th, 1912, over 1,500 people lost their lives. While it is certain that a lack of lifeboats and preparedness contributed to the deaths, other factors, such as many of the third-class passengers being unable to understand English and failing to understand what was happening, could not have been avoided. Whether the inquest was helpful or uncovered damaging secrets is a matter of opinion, but this bit of history does make an interesting postscript to one of the most famous maritime disasters the world has even known.