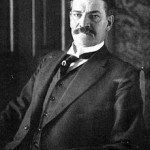 Most people know the story of Titanic: the majestic ocean liner that sank into the depths of the North Atlantic on her maiden voyage from Belfast to New York. However, what some may not know is that the ship carried high-ranking military men who had impressive careers and a long military pedigree. While their names might be known in passing, recognizing their service and remembering them as more as Titanic passengers honors their memory and the sacrifices they made. While some people connect Titanic with British passengers and crew, many were American and came from families that had a rich military history. One such man on board was Colonel Archibald Gracie IV.

Colonel Gracie’s family was well known in New York, as his namesake, the first Archibald, had built Gracie Mansion near the East River and entertained many famous guests there. Among them were future presidents and kings, as well as New York business royalty. Colonel Gracie’s father, Archibald III, was a military man and rose to the rank of general by the time the Civil War broke out. A year before the war ended, he was killed during a scouting mission at the Siege of St. Petersburg. His son, Archibald IV, was only five years old at the time but followed in his father’s footsteps by attending the United States Military Academy as a young adult. He eventually joined the New York Militia, which was an infantry regiment that briefly served in the Civil War. 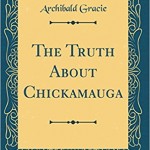 After his service, Colonel Gracie married and had two daughters, both who died young. His younger daughter, Constance, was killed in a hotel in Paris when she was twelve after attempting to jump onto a descending elevator and was summarily crushed between it and the shaft. His older daughter, Edith, died of pneumonia at age 24, five years after her father experienced the Titanic sinking. Nine years after the death of his younger child, Colonel Gracie boarded Titanic after touring Europe and writing a book about the Civil War entitled The Truth about Chickamauga. Chickamauga was a battle his father had fought in before his death at St. Petersburg, and the Colonel had spent years learning about the skirmish before heading back to America. The book was published in 1912.

When Colonel Gracie boarded Titanic as a first-class passenger, he did so alone. His wife and surviving daughter did not travel to Europe with him and waited for him back in New York. He enjoyed escorting single ladies around the ship, as unchaperoned women roaming the decks alone was frowned upon among the first-class inner circle. He was also fond of storytelling, especially when it came to military tales and exploits. He and Isidor Straus, the co-owner of the New York-based Macy’s department store, spent a great deal of time discussing the Civil War and its impact on American business. Those who survived and spent time with Gracie on Titanic said his knowledge and stories about the war were in inexhaustible supply. When he wasn’t telling stories, Gracie spent time on the ship’s squash court, in its swimming pool, and in the first-class library, where he indulged himself in reading its ample supply of books. 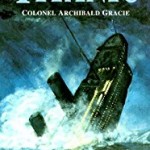 After Titanic struck the iceberg, Gracie pulled on a life jacket before helping women and children into lifeboats and ensuring they had blankets. Shortly after, he noticed that Charles Lightoller, the ship’s 2nd officer, was trying to free the remaining lifeboats. Colonel Gracie assisted the officer, using his own penknife to cut the moorings. Sadly, Gracie’s good friend Clinch Smith, who was helping the men with the boats, was washed overboard as they tried to free the last boat. Gracie recalled that he sank from sight so quickly that there was no time to try and rescue him. Once Gracie was washed into the frigid waters, he was one of the few who survived the night clinging to its overturned keel. He was eventually pulled into Lifeboat 12, but his life in the aftermath of the terrible tragedy would never be the same.

Although Colonel Gracie wrote a book about his experiences during the Titanic sinking, he never survived to see it published. His health began to decline rapidly because of the hypothermia he’d suffered that night, and on December 4th, 1912, he slipped into a diabetic coma and died. His book was published the following year. Colonel Gracie’s wife, Constance Elise Schack, outlived her husband and both of her daughters and died at age 85. The entire family is buried in Manhattan’s Woodlawn Cemetery, and Colonel Gracie’s headstone reads, “Hero of S.S. Titanic.”

There were others aboard Titanic with a military past, but none so brave as Colonel Archibald Gracie IV, who is remembered as man who saved many lives instead of trying to save himself. This sacrifice eventually claimed his life, and his name should live on as a fine symbol of bravery and what it truly means to be a soldier. 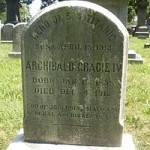