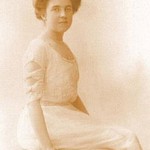 On the night of April 14, 1912, a young man named Robert Hitchens was on the bridge steering the gigantic ship. At 1140, there was the sound of three bells, and suddenly the bridge on the phone started to ring. The call was from the crow’s nest, it was answered, and what was said was quickly passed onto the man in charge of the bridge at that moment, First Officer William Murdoch.  Murdoch saw what the fuss was all about, an iceberg right in the path of the Titanic, and he took action.  Hitchens was told to turn the wheel, and he did, but it was too late. In under three hours, the Titanic would be on the bottom of the ocean. However, Robert Hitchens was placed in charge of lifeboat number 6, and he wasn’t alone. One of the women in that boat was the famous Margaret “Molly” Brown, but another woman would be too, and she became very important in the movement for women to get the right to vote. The name of this woman was Elsie Edith Bowerman.

Elsie Bowerman: A Woman Fighting For a Cause 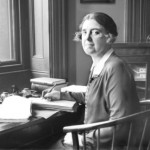 Elsie Bowerman was in lifeboat number six when the Titanic was sinking, but this was only the beginning of the adventures that this woman was to have. In 1917, Bowerman returned to England, and she toured the country organizing women who wanted to gain the right to vote, and even gave speeches that encouraged men to join the cause as well. A year later, Bowerman went to work for the Womens’ Guild of Empire as a secretary, and during the time, she earned an MA in law.  By 1924, Bowerman was a lawyer who practiced the law on the Southern Eastern Circuit for the next 14 years.

When World Was 2 broke out, Bowerman gave up her law practice and for the next two years, worked for the Women’s Voluntary Service. Bowerman then worked for the Overseas Services of the BBC.  Bowerman did return to the United States in 1947 to set up the United Nations Commission on the Status of Women. Once the 1950’s came, Bowerman returned to St Leonards-on-Sea to take care for her elderly mother. On October 18, 1973, Elsie Edith Bowerman passed away from a stroke at the age of 83. 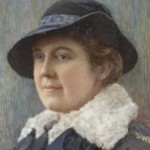 Timothy Medhurst is the great-great-grandson of Quartermaster Robert Hitchens.  While doing research on Elsie Bowerman, and Robert Hitchens who were both in lifeboat number six, he found a portrait of Bowerman.  In the picture, Bowerman is wearing a Women’s Scottish Hospital uniform, in which Bowerman was an orderly.  The picture of Bowerman was in the possession of a family named Dorset, but where they got it from, no one knows, and when they sold it, they had no idea who the woman in the portrait was.

Now, the portrait of Elsie Bowerman will go up for auction, and Timothy Medhurst will be the one selling it. What does he think of this remarkable potrait and the amazing woman in it?

“This small portrait is an amazing snippet of history in which you can see a woman of survival, dedicated to equal rights. It is a wonderful thing to be able to look at the same lady who would have looked at my great- great-grandfather over 100 years ago on board a lifeboat in the middle of the Atlantic Ocean.” 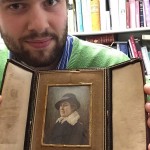 Elsie Edith Bowerman lead an amazing life, and if not for her efforts, and women like her, modern women would not have the rights they do now.  Bowerman was a suffragette, and she was on board the RMS Titanic the fateful night that the grandest ship in the world struck an iceberg and sank to the bottom of the North Atlantic ocean.  Bowerman ended up in lifeboat number six, who had a man named Robert Hitchens at the helm.  Hitchens was at the wheel of Titanic when she hit the iceberg, but he was put in lifeboat six to ensure the women in it were safely away from the sinking liner.

Over 100 years later, the great-great- grandson of Robert Hitchens, an auctioneer by the name of  Timothy Medhurst, who got it from a family who had no idea who the woman in the portrait was. This portrait truly gives meaning to the phrase, “a picture is worth a thousand words.”

The portrait of Elsie Edith Bowerman will be up for sale in March.