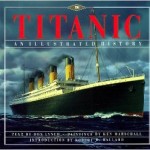 As a teenager, Ken Marschall dazzled the world when he created his first paintings of the RMS Titanic, back in 1967. However, since that time, Marschall has created a reputation as the best Titanic artist in the world. Marschall is so talented as an artist, he has written books, and even worked in Hollywood where he put his artists’s skills to the test in famous movies. One of the most famous directors in the world, James Cameron, used the artwork of Ken Marschall when he pitched his blockbuster movie Titanic to the studios, and his goal was to bring Marschall’s amazing paintings to life on the big screen.  This was just the beginning of the relationship that the two men formed, and it would  be one that would change their lives, and take them 12 thousand feet underwater. 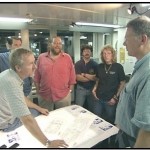 In 1984, James Cameron was working on a movie called The Terminator. The movie starred Arnold Schwarzenegger, Linda Hamilton, and Michael Biehn. The movie was about the future, and in it, man was battling machines called terminators. Ken Marschall was hired to work on the movie as an artist, and some of his amazing matte paintings were used as the background for these futuristic scenes. Once the movie was over, both Marschall and Cameron would move onto other projects, but they would reunite to work on Cameron’s blockbluster movie about the door passenger liner.

Ken Marschall, and Don Lynch, both wrote the book Titanic: An Illustrated History, and James Cameron wanted their expertise on the Titanic for his movie. The two men got to go to Mexico, and it was at this location that Cameron build a replica of the Titanic that was about 90 percent to scale of the real one. However, some very iconic areas of the ship were recreated including the famous Grand Staircase. In interviews, both Don Lynch and Ken Marschall talked about the thrill of acting being on board the massive movie set, and seeing the most famous parts of Titanic brought back to life. Though most of the set was destroyed in the sinking scenes, for one brief moment, the world’s most famous ship was alive again and sailing across the open sea. 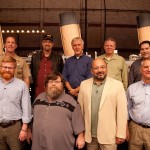 Once the filming of a movie is done, artists and directors move onto other projects, and while that was the case with both Marschall and Cameron, the fact is that their next project did actually involve the Titanic as well. James Cameron always wanted to do a Titanic movie, but once it was over, his interest did not just stop there. The fact is, Cameron’s interest in Titanic only grew, and he began to make dives to explore the wreck. James Cameron took Ken Marschall to the bottom of the ocean with him, and the film The Ghosts of the Abyss, shows not only Marschall with Cameron, but actor Bill Paxton, and historian Don Lynch was with him as well.  Together, this group of courageous men made over 30 dives to Titanic, and even made additional documentaries about their explorations to the ship including never-before-seen areas of the ship like the cargo hold and Turkish bath.

James Cameron, Ken Marschall, and other Titanic historians and experts also got together to commemorate the 100th anniversary of the sinking of this great ship in 2012. The special called, Titanic at 100: Mystery Solved, has this group of men going over the Titanic wreck site and also updating what truly happened to the ship. To help with this evaluation on a maissive scale, 3D technology was used, and a gigantic CGI replica was also featured in the documentary.  The explorations used during that final Titanic exploration will be studied for years to come, and no doubt, Ken Marschall will be a part of that evaluation.

Ken Marschall is known as the world’s most famous Titanic artist.  Marschall first painted the Titanic when he was 16, and two years later, he was commissioned to do another painting of the famous ship. Though he has no formal training, the fact is that this man has talent unlike no other, and has even published books and worked in the film industry.

Marschall’s paintings of the famous doomed liner are incredible, and even inspired the famous director James Cameron to not only create his Titanic movie, but to explore the famous wreck like no one ever has before. Ken Marschall has talent like no one else, and the world will continue to enjoy his works of art for many years to come.