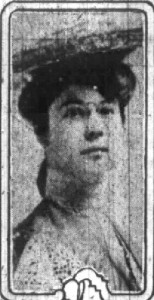 When the great ship, the RMS Titanic set sail from Southampton, England, on April 10, 1912, no one who saw her leave, or who was on board her, would have any idea that they were literally watching history unfold before their very eyes. The passengers that were on the biggest ship in the world were from all walks of life from the very rich to the very poor. Three of the passengers were from Milwaukee, Wisconsin, and one of them was even a captain, and the name of the family was Crosby. The Crosby family consisted of Captain Edward Crosby, his wife Catherine, and their daughter Harriet.  You can read about other survivors of this great tragedy here.

The Marriage of Captain Edward and Catherine Crosby

Mr. and Mrs. Edward Crosby began their married life together in Michigan, and this was there the couple was married. The couple lived in Michigan until 1897, and from this state, the couple then moved to Milwaukee, Wisconsin.  It was in this popular Wisconsin city that Edward Crosby became a captain, and started the Crosby Steamship Lane.  Crosby started the steamship line in 1903, and he purchased a total of four ships that took passengers from Milwaukee, and worked its way to Lake Michigan making stops along the way.

The Affidavit of Catherine Crosby

After the Titanic sank, and the survivors were brought to New York City via the RMS Carpathia, an ambitious senator named William Alden Smith, wanted to hold an inquiry to find out exactly what happened.  On the 18th day of the inquiry, Titanic survivor, the now-widowed Catherine Crosby gave her testimony.  The widow’s testimony went on to talk about how she, her husband, and daughter Harriet, all boarded the Titanic at Southampton.  Crosby reported that she and her family stayed in two staterooms, numbers 22 and 26.  For the first four days, the trip was normal, and eventful, but that changed on the day of April the 14th. On the 14th, Mrs. Crosby noticed that the temperature had dropped significantly, and that sailors were constantly taking the temperature of the water.  Crosby stated that she noticed that by the afternoon of April 14th, she began to see ice in the water, and her husband, who was an experienced sailor, told her what the sailors were doing and why.  The night came, and Captain Crosby went to bed around nine in the evening, and within 90 minutes, she too went to bed, and she noticed just how fast the Titanic was going.  Crosby was asleep, but then a loud thud woke her up, and at that time, the ship had stopped.  Captain Crosby was also woken up by the noise, and went up on deck, to see what was going on. The captain returned, and both Crosby and her daughter, then went up on deck.  At that time, the officers were putting women and children into the lifeboats, and Crosby and her daughter got into it.  Captain Crosby was nowhere to be found, and his wife testified that she had no idea what happened to her husband as the lifeboat was being lowered.

Catherine Crosby also discussed what happened while and her daughter were in the lifeboat that held at least three dozen people in it. Crosby claimed they had no provisions at all in the boat. The lifeboat was rowed a far distance from the sinking Titanic, and Crosby stated she did not see any other lifeboats lowered, but she could see that ship going down.  Crosby also stated that she was the distress rockets being fired into the air, and she also heard the sound of pistol shots. After the Titanic sank, Crosby described hearing the cries of all the people floating in the ocean around them, and that it was very cold.  Crosby testified that she was so cold that the officer in charge of the lifeboat, took the sail and wrapped it around her.

Finally, after a few hours adrift, the Carpathia showed up and began rescuing the survivors in the 20 lifeboats.  Crosby claimed that the officers and crew on the Carpathia treated everyone with great kindness, and that there were rumors among the survivors and passengers that the lookout was making statements  about being blamed for the disaster, and also that the ice warnings that came in wre ignored by the bridge officers. 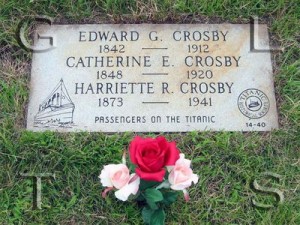 Eight years after losing her husband, Catherine Elizabeth Crosby passed away from pneumonia on July 29th, 1920. Crosby was buried beside her husband, and later on, her daughter Harriet would also be laid to rest with her parents in 1941.