Life Beneath The Seafloor: Thermal Vents 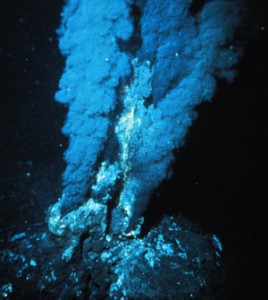 In February, 1977, Bob Ballard and his team of geologists, geochemists and geophysicists discovered hydrothermal vents on the Pacific Ocean floor.  This discovery has changed our understanding of life on Earth and possibly the universe.

Scientists had analyzed different types of rocks gathered from the ocean floor.  The structure of some of these rocks could only be created by hot water seeping into the cold water surrounding the rocks.  This hot water would react and exchange chemicals with these rocks.  For this reason, scientists predicted these hydrothermal vents might exist.  Ballard’s research took place along the Galapagos ridge’s cold, dark seafloor.  Through these vents gushed fluids that were warm, rich with minerals and abundant with extraordinary unexpected life.

To conduct this research, Ballard and his team relied on ANGUS, which stands for Acoustically Navigated Geological Underwater Survey.  Angus is a submersible camera which can be lowered to extreme depths for periods of up to 12-14 hours, and can snap over 16,000 photos in a session (quite the photo shoot!).

On February 15, ANGUS was lowered to scout the area.  After many hours the normal temperature of 35.6 degrees F (2 degrees C) spiked (called a “temperature anomaly” by scientists) for three minutes.  At the same time the ANGUS’ camera took 3,000 color photos.  In Ballard’s words this is what they found:

“The photograph taken just seconds before the temperature anomaly showed only barren, fresh looking lava terrain.  But for thirteen frames (the length of the anomaly) the lava flow was covered with hundreds of white clams and brown mussel shells.  This dense accumulation, never seen before in the deep sea, quickly appeared through a cloud of misty blue water and then disappeared from view.  For the remaining 1500 pictures, the bottom was once again barren of life.”

On subsequent scoutings, foot-long white clams (not to be confused with foot-long hot dogs!), mussels, white crabs and a purple octopus were found in areas around the thermal vent .  Other vents were found as well.

Before the discovery of these vents, scientists believed life could not exist in the dark depths of the ocean.  In an article supported by the National Science Foundation (NSF) the discovery is explained.

“Instead of using light to create organic material to live and grow (photosynthesis), microorganisms at the bottom of the food chain at vents used chemicals such as hydrogen sulfide (chemosynthesis).”

The energy for life was not from the sun but from the earth itself!  Another difference is that these microbes do not eat. Some get their energy by breaking down chemicals in the hydrothermal fluid.

Since life can exist without sunlight and oxygen, scientists are taking a second look at the possibility of life in places that before seemed too hostile to support life.  One branch of science deeply involved in this area of research is astrobiology.  Who knows what will be found in the future? Useful products? Life-saving drugs? More purple octopi?  Only time will tell!