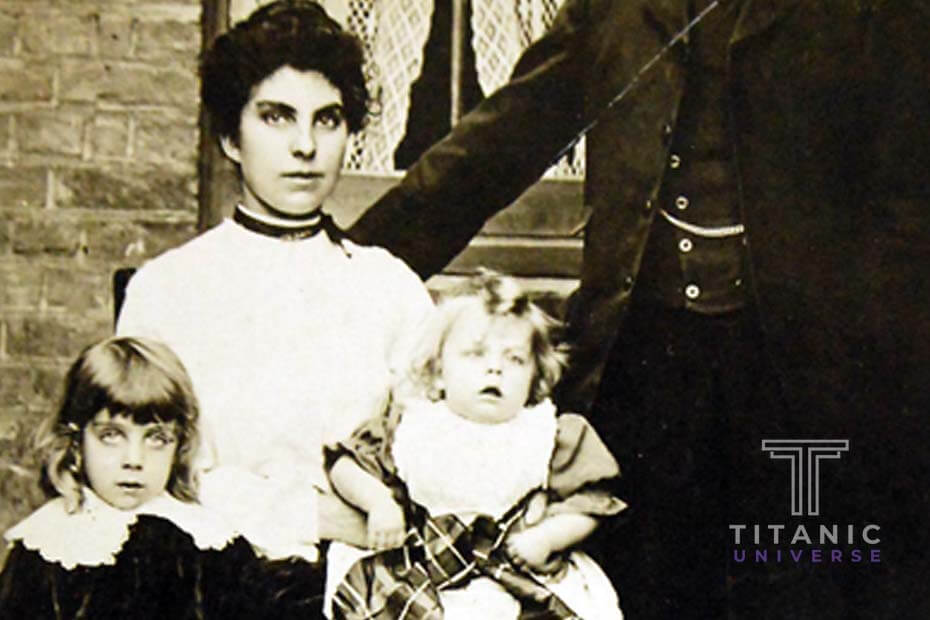 On April 15, 1912, the RMS Titanic struck an iceberg and sank into the cold waters of the North Atlantic, with over 1500 people still swarming its decks. The only survivors were 705 people in 20 lifeboats, and those poor souls watched in horror as the most beautiful ship in the world sank slowly, and they were utterly helpless to do anything about it. The people who were in those lifeboats were men and women, but what people failed to realize is that there were children too, and those little boys and little girls had a horrific memory that would stay with them for the rest of their lives, especially if they lost a parent on the deck of the doomed ship. One young boy who survived the disaster was nine-year-old Frankie Goldsmith, and his father, Frank Goldsmith, was one of the grand ship’s victims.

Strood, Kent, England, is where Frank John William Goldsmith was born on December 19, 1902. Goldsmith was the oldest child, and he had a little brother named Albert John, but the child died of diphtheria at the very young age of six, leaving Goldsmith an only child at the age of nine. One year later, in 1912, the Goldsmiths decided that more job opportunities for a tool maker would be better in Detroit, Michigan, than in Kent, so it was time to relocate to America.

The Goldsmith Family and Friends On the RMS Titanic

The Goldsmith family purchased tickets on the Titanic as Third Class passengers. The Kent family was not traveling alone, they had friends named Thomas Theobald and Alfred Rush. While on board the big ship, young Goldsmith found many English boys his age, and the group often wandered the ship together. As described in his book, Goldsmith and his friends went into the boiler room and watched the men there do their job and sing songs while shoveling the coal. Of the seven boys Goldsmith hung around with, only Goldsmith and one other boy would make it into a lifeboat and survive the disaster.

On the night of April 14, 1912, when the giant Titanic scraped alongside the iceberg, the elder Goldsmith, Frank Sr., felt the shudder of the metal melting ice and woke up his son, his wife, and their two traveling companions. Goldsmith did not hesitate and instantly took his family and friends to the boat deck. At that time, collapsible C was being loaded, and 10-year-old Frankie, and his mother, were put into a lifeboat. According to Goldsmith’s book, the 16-year-old Alfred Rush was offered a place in the lifeboat, but the young man, who had turned 16 that very day on April 14th, refused it, saying that he would prefer to stay back with the other men. Alfred Rush died as a 16-year-old man. At the time, the young boy had no idea that the ship was sinking and that he would never see his father again. Goldsmith got a pat goodbye from his father, and then their other friend, The bold, took off his wedding ring and asked that Mrs. Goldsmith please give it to his wife.

From the lifeboat, Goldsmith could see the entire Titanic sink, and he sat there with his mother and watched as the ship sank lower into the water. As the time toward 2:20 am drew near, the Titanic was in her final plunge; Mrs. Emily Goldsmith decided that the sinking of the ship that would end his father’s life was too dramatic for the young boy and held his head into her shoulder. However, Mrs. Goldsmith did not realize that her son could lift his head enough to see things anyway and witnessed the final plunge of the mighty ship, the RMS Titanic.

The night had just begun, and their ordeal was just getting started, and they all had a few hours to wait until the rescue ship Carpathia arrived to get them all on board and take them back to New York.

Seven hundred five survivors were floating in the North Atlantic after the great ship, the RMS Titanic, sank into the ocean’s cold waters. The survivors consisted of men, women, and children, and among them were 10-year-old Frankie Goldsmith and his mother. Goldsmith’s father, Frank Senior, had placed his wife and son in one of the last lifeboats to leave the ship, and he stepped back, joined the other men, and met his fate bravely. While Mrs. Goldsmith, and her young son Frankie, float around the North Atlantic in a collapsible boat, they get to see the RMS Titanic as it sunk slowly in the middle of the night. Frankie’s head was placed on his mother’s shoulder to block his view from such a horrific scene, but the young boy got to see the ship sink anyway.

The Goldsmith Family and Friends On the RMS Titanic

After being in the lifeboat for around two hours, the RMS Carpathia made its way to where the RMS Titanic went down.  While on the Carpathia, the little ship played host to not only the 700 passengers and crew but the 705 Titanic survivors as well, so things were quite difficult because there were not enough beds, and people were sleeping on the floor with blankets. Naturally, the mood on board the rescue ship was heavy; women had lost their husbands, and children, like Frankie, were now without their fathers.  To help pass the time, many of the Carpathia passengers and Titanic survivors did what they could to help one another. One such volunteer was Mrs. Goldsmith, who wanted to care for her fellow survivors. When the Titanic struck the iceberg, most of the passengers of the mighty ship were in bed and ended up leaving the ship in just their nightgowns and slippers.  Mrs. Goldsmith helped occupy the time by taking material and sewing it into clothes for her fellow passengers to wear. She also did her best to help her young son keep his mind off everything that had happened on the Titanic to his father.  Frankie was tasked with caring for a surviving Titanic fireman named Samuel Collins, who proudly took the young boy under his wing, and he and the Carpathia were so taken with the young man that they made him a crew member. The young man was so proud of passing the fireman’s initiation that he began to cry but was quickly comforted by the Carpathia’s crew.

Life After Arriving In New York

Once they arrived in New York, Frankie Goldsmith, and his mother, got help from the Salvation Army, who helped them both get to their destination of Detroit, Michigan.  In Detroit, Frankie and his mom had relatives, and the two eventually settled into a very close home to the famous Navin Field, a baseball stadium in Detroit.  The sound of the baseball players hitting balls, and the crowd breaking into a roar, reminded Frankie of the night the Titanic sank, and he never set foot in the field even as an adult due to the memories those cheers and cries reminded him of. Because Frankie was very young, he had no idea that his father was dead, and it took him years to truly understand that he was never coming home again. At age 23, Frankie got married, had three sons, relocated to Ashland, Ohio, and served in World War II as a photographer, which led him to open his photography supply store in Ashland.   Goldsmith wrote a book about the Titanic sinking. It was published nine years after his death in 1991 by the Titanic Historical Society and remained the only book a Third Class passenger ever wrote.

Frank Goldsmith died at the age of 79 in 1982. Goldsmith’s last wish was to be cremated, and he wanted his ashes to be scattered at the place where the Titanic sank so he could be reunited with his father.  On April 15, 1982, Goldsmith got his wish on the 70th anniversary of the Titanic sinking, and his ashes were scattered over the North Atlantic.

To this day, the relatives of Frankie Goldsmith still talk about their brave Third Class passenger and all he endured, and many of his family members give lectures and share his brave story in classrooms and museums around the world.

Rest in Peace, Frankie. May you be playing with your father on the deck of the RMS Titanic.