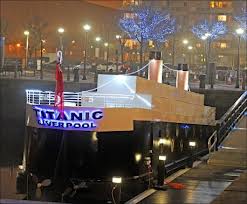 This week “The Titanic Sinking Boutique Hotel” will open at Liverpool’s Salthouse Dock.  This ten- room, three-bedroom hotel will have a replica of the first class dining room, state-of-the-art living quarters, and a luxury ballroom.

The hotel has been created to look like it is sinking with an uplifted stern, slanting porthole windows and slanting lines on the sides to create the illusion that it is sinking.  To underscore that the ship split in two – there are two instead of four black funnels on top and a jagged edge at the cabin’s bow.

Many think this is in poor taste.  Its location is a prime concern.  The hotel can be seen from the Merchant Navy memorial, the White Star building  (owner of the Titanic and was headquartered in Liverpool at that time) and the rededicated Isle of Man Steam Packet Company memorial.  Also, relatives of those lost still reside in Liverpool and in the nearby Merseyside area.

Owner Alfie Bubbles, 53, of West Derby, Lancashire is a former Merchant Navy seaman.  In an interview with The Liverpool Echo, Bubbles responded to the criticism:  “My plan was to have three hotel boats and we always asked our guests what else would do well.  At least 95% of written suggestions were in favour of a Titanic-themed boat.”  He also said that he had asked the opinion of other ex-Merchant Navy friends.  The result, he stated, was that “My pals thought it was a great idea. It’s a bit of fun.  No way was I looking to upset people.  You’ve got to get it into perspective.”  In an interview with the BBC News, Bubbles was very serious in his reply to the concern: “ I’m an ex-merchant seaman myself and I would never ever dream of causing any disrespect to any merchant seaman, whether it be something to do with the Titanic or any other merchant sea or Royal Navy disaster.”

Bubbles has two other floating hotels – The FAB4 Beatles Yellow Submarine Hotel and one with a theme of Batman’s villain The Joker.  The 80-foot Yellow Submarine is painted to look like the one on the Beatles’ album cover.   It was previously owned by Paramount Pictures and used to shoot the 1990 thriller “The Hunt for Red October”.  The interior is a combination of the 60’s psychedelic look with modern touches.  The three guest rooms have 3D televisions, WiFi and computers.  A one night stay is $230 with weekends ranging from $460 and $540.  Reservations are arriving from all over the world.

The Joker Boat was built specifically for couples or families.  It’s called The Joker because it was originally built for Jack Nicholson who played The Joker in Batman.   Bubbles found it in LA, shipped it back to Liverpool and restored it into a luxury apartment boat with all the amenities and electronics of a 5 star hotel.

Rumors are circulating that the next hotel will be themed after Pirates of the Caribbean–the Black Pearl.

Across the Atlantic and beyond, a development group has submitted a proposal to the Port of San Francisco to build an exact Titanic replica and to be called Titanic II.  It would be used as a 568-room floating hotel and conference center with several restaurants.  It would also include a small museum.

Developers describe it as: “An estimated $150 million project would include the construction of a ship 860 feet long with 94-foot beam, featuring five decks of “luxurious” staterooms, an indoor swimming pool, an observation platform and the re-creation of the original ship’s bridge, captain’s cabin and wireless cabin.”

The plan is to have its entrance under the Golden Gate Bridge be a worldwide event with Kate Winslet and Leonardo DiCaprio riding the bow.

The proposal is under consideration.