First Titanic Film Came Out One Month After Sinking 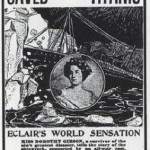 The movie industry has changed a lot since the RMS Titanic went down in 1912. These days, a movie can take a month or two to film, then up to another six months of editing, sound, and special effects. However, back in 1912, movies were put out in a matter of weeks, and a great example of that is a movie that came out four weeks, and one day, after the Titanic sank. What made Saved from the Titanic  such a special movie was the fact it was the very first one that ever came out about the disaster, and it also starred one of the Titanic’s 705 survivors. The name of this survivor was Dorothy Gibson, and not only did she survive the sinking of the world’s biggest and most luxurious ship, but she was also a young actress that had starred in a few movies and had some modeling more climbing on board the ship that would change history.

Dorothy Gibson and the RMS Titanic 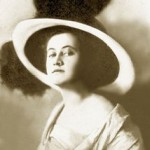 Dorothy Gibson had been signed with a studio named Eclair Film Company.  While enjoying some relaxation time in Italy, with her mother, Gibson got word that Eclair wanted her to return to New York City to begin working on some films.  Gibson, and her mother, climbed on board the RMS Titanic, when the ship was at Cherbourg, France, the second stop the ship had while on her way to New York City. On the night of April 14th, Gibson was playing bridge in the First Class Dining Saloon with some other passengers, enjoying cocktails and the company.  Later on, Gibson would say that the bridge game saved her life, because she and her fellow passengers were still there when the iceberg collision hit at 11:40 pm. Gibson described the sound of the iceberg scraping against the Titanic hull as a “long, drawn, sickening scrunch.” The game came to an end, and Gibson went out on the boat deck to see what was going on. Gibson became alarmed when she noticed that the ship had a list to one side, so she went to fetch her mother. However, two of the bridge players also saw what was happening, and they too went to the lifeboats with Gibson and her mom. The two bridge players were Frederic Seward and William Sloper, and the four of them made it onto lifeboat number 7, which was the first lifeboat to be launched at 12:40 am, which was one hour after the iceberg collision. However, the lifeboat had its own issues, and while Gibson, and 30 other people in the boat, were waiting to be rescued, the boat began to leak.  The lifeboats have plugs on the bottom to keep water out, and it was not to be found, but the problem was solved by according to Gibson,  “this was remedied by volunteer contributions from the lingerie of the women and the garments of men.”

Saved From the Titanic Movie 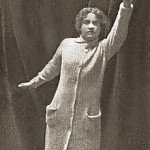 Once Gibson got home to New York City, she began working on the film about the Titanic. The idea for the movie may have come from Gibson’s lover, studio producer, Jules Brulatour, who even had a camera crew sent to film the arrival of the RMS Carpathia, which was later used in the film. Brulatour also used archive footage of the Titanic launched from Belfast, footage of Captain Smith on the RMS Olympic, and footage of icebergs in the North Atlantic all helped tell the story of the sinking. Once the movie was complete, President Taft was given a personal copy of it.  Dorothy Gibson relived her survival of the sinking, and even wore the same outfit she was rescued in, which only added to the authenticity of her story. The film was only ten minutes long, which was typical of movies from that time period.  When the film was released, exactly 29 days after the disaster on May 14th, 1912, and the reviews were mostly positive.  However, a fire at Eclaire in 1914 destroyed all known copies of the film, and it was the last movie that Dorothy Gibson ever starred in.

The very first movie about the sinking of the RMS Titanic came out 4 weeks after the disaster. The movie starred Dorothy Gibson, a 22-year-old actress, who was actually on the ship when it struck and iceberg and sank. Gibson had been playing bridge, at the time of the iceberg collision, and she and her mother ended up leaving the ship in lifeboat number 7.  When Gibson returned to New York City, she began making the movie about the disaster called Saved From the Titanic, which was only about 10 minutes long, and she wore the same outfit she was rescued in. Sadly, no copies of the movie are around due to a fire that took place at the Eclaire Studios two years after the disaster. The only parts of the movie that survived are production stills from it, and they show many scenes that portray Gibson with a man named Ensign Jack, who plays her love interest in the movie.