THE ERIC C. CAREN COLLECTION: HOW HISTORY UNFOLDS ON PAPER, PART I 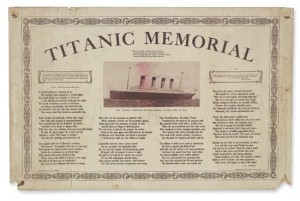 Features a long poem on the Titanic and an illustration of the ship at sea. The author was a Russian-born farmer and real estate agent in the Oklahoma panhandle. This possibly unique piece was issued as a promotion for The Watchman, a Seventh-Day Adventist publication out of Nashville. It suggests that the Titanic tragedy and other disasters of the day were “prophecy-fulfilling and history-making Signs of the Times.” It concludes with the lines “Shall we heed the lesson, and make preparation / While mercy still lingers, or meet a like doom?” Not in WorldCat or otherwise known.

(NY) Swann Auctions, the oldest rare book auction house in the nation will sell Part I of the Eric C. Caren Collection on September 15, 2011. Mr. Caren has collected for almost half a century. He sold his first collection of rare and historical newspapers to form the nucleus of the permanent collection of the half billion dollar Newseum on Pennsylvania Avenue, DC ten years ago. Now having multiple items for every event, historical figure and genre in Modern history from Columbus to the Present, he has arranged for a series of at least 3 single owner auctions to take place in NYC at Swann in order to “thin the hoard”. The sales will be entitled “How History Unfolds on Paper- Selections from The Eric C. Caren collection”. Mr. Caren will still maintain The Caren Archive (approximately one million items strong) and he continues as CEO of Retro-Graphics Publishing, which offers amongst other things, reproductions of rare items for museum shops around the nation including The Smithsonian, The Baseball Hall of Fame, The Holocaust Memorial Museum, etc.

Highlights of Part I on September 15 will include the following:

Plus- An Incredible Thomas Edison Archive on the Light Bulb and the Pearl Street Station (NY) which was the first commercial use of the great invention!

For More Info. Contact Rick Stattler at Swann-212-254-4710 or go to www.swanngalleries.com