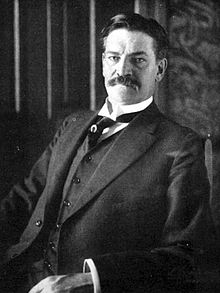 Back in 1912, a man named Archibald Gracie boarded the RMS Titanic. He was an older man, who always kept in great shape, and he enjoyed the amenities that the big ship provided. When disaster struck, Archibald Gracie was one of the first men up on deck to help out with assisting with helping everyone to keep calm especially the small group of women that he had been friendly with when he was on board. After Gracie was rescued, and returned to New York City, he wrote a book about what he experienced that terrible night the Titanic sank. However, because of the cold, and the freezing cold water he was in, Gracie died in December of 1912. However, in the Wreck & Sinking of the Titanic book, Archibald Gracie described the horrors of what he saw that night, and his words paint a picture of both heroism and cowardice that terrible night.

Archibald Gracie Speaks About Other Passengers

When Archibald Gracie got home,  he had a lot to say about everything he had seen on the deck of the RMS Titanic. Gracie told the Wreck & Sinking of Titanic author all about his harrowing ordeal, and he also had some things to say about some specific passengers that he witnessed up on deck. “Mrs. Isador Strauss went to her death because she would bot desert her husband. Although he pleaded with her to take her place in the boat, she steadfastly reused, and when she ship settled at the head the two were engulfed by the wave that swept the vessel.” Another passenger he spoke about was John Jacob Astor, and told the Wreck & Sinking author all about what he witnessed. “The conduct of Colonel John Jacob Astor was deserving of the highest praise.  The millionaire New Yorker devoted all his energies to saving his young bride, formerly Miss Force of New York, who was in delicate health.  Colonel Astor helped us in our efforts to get Mrs. Astor in the boat. I lifted her into the boat and she took her place Colonel Astor requested permission of the second officer to go with her for her own protection. Colonel Astor then inquire the number of boat which was being lowered away and turned to the work of clearing the other boats and reassuring the frightened and nervous women.” 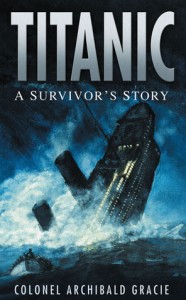 Colonel Archibald Gracie was not at a loss for words when it came to the iceberg warnings. Gracie stated emphatically that despite numerous warnings, Titanic did not slow down one bit, nor did Captain Smith order for the ship to decrease speed. However, Gracie also talked about warnings that were given from the natural world that also went unheeded:

“In the twenty-four hour’s run ending the 14th, the ship;s run was 546 miles, and we were told that the next twenty-four hours would see even a better record posted. When Sunday evening came, we all noticed that increased cold, which gave plain warning that the ship was in close proximity to icebergs or ice fields. The officers, I am credibly informed, had been advised by wireless from other ships of the presence of icebergs and dangerous floes in the vicinity. The sea was as smooth as glass and he weather clear, so that it seemed that there was no occasion for fear.”

Some women could not get into the lifeboats fast enough, and did not need any prompting to save themselves. However, there were some women who would not be rescued, and Colonel Archibald Gracie was right there as a witness. One woman he saw was a Miss Evans, who came from New York who would not board any lifeboat.

“She had been told by a fortune teller in London that she would meet her death on the water.”

One woman credited 5th Officer Lowe as being the one officer that saved many lives, and Gracie got the story from a woman who would not be named, but she relayed the story to him when they were on board the Carpathia.   Lowe gathered up many of the lifeboats and began passing off some of his passengers to them until he was left with an empty vessel. He took crew members with him, and then used that one boat to go back to look for people that were still in the water.  Lowe was responsible for the men on the upturned collapsible boat being rescued, and he had excellent timing because the upturned boat was beginning to sink, and the men on it were able to go into the water. Had Lowe not come along, many men, including Harold Bride, and Charles Lightoller may have been lost. 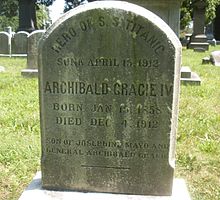