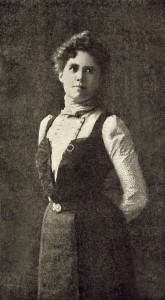 Whether people are the survivors of a terrible disaster, like the sinking of the RMS Titanic, or some other disaster, it takes an incredible amount of courage to be able to face certain death, and then pick the pieces up of their life, in order to go on.  Once the 705 survivors of the RMS Titanic made it to New York City, they were facing an uncertain future, and some of them were left devastated by the death of their husbands, or in some cases, the deaths of their entire family.  However, even if someone on the Titanic did not lose a family member, or a family, the mere fact they were able to survive when so many people died, was nothing short of a miracle. One brave woman that did not let a disaster get her down, was Helen Churchill Candee, and she showed that anyone can have a full life even if they survived a horrific disaster.

The Birth of Helen Churchill Candee

Helen Churchill Hungerford was born on October 5, 1858, the daughter of a merchant named Henry Hungerford and his wife, Mary Churchill.  Candee grew up in Connecticut, and then got married to a man named Edward Candee. The young wife gave birth to two children named Edith and Harold Candee. However, married life was not a happy one for Candee, and her husband Edward was abusive to both his wife and children until he finally abandoned them.  Now being a single mother, Candee put her writing talent to good use, and supported her two children by writing articles for magazines such as Scribner’s and The Ladies’ Home Journal. Candee wrote about the important topics of the day such as how to raise children, etiquette, managing a household, and other important topics that were important to the women of the day. Eventually, Candee wrote about other hot issues of her day such as women’s rights. From New York City, Candee, and her children, ended up in Oklahoma, and in this area, Candee wrote about life in Oklahoma, and her work got her attention on a national level. While living in Oklahoma, Candee finally divorced her husband, and this major event in her life turned out to be one of the best things that ever happened to her. After her divorce, Candee established herself as a strong feminist, and even wrote books on how women could support themselves without the support of a husband. Candee ended up writing a total of eight different books, and some of the topics involved traveling, art, and one work of total fiction.

In 1912, Candee was taking a tour of Europe to research her next book, which was titled, The Tapestry Book, which ended up being the highest selling book of Candee’s career.  Candee was enjoying her time overseas when the fun was interrupted by a telegram from her daughter Edith, who told the author that her son Harry had been injured in a car accident, and she needed to return to America right away. Candee wasted no time, and quickly booked passage on the next ship to America, which was the RMS Titanic. Though her reasons for going home were not the best, Candee enjoyed her time on the luxurious ship, and she got to rub elbows with some of the biggest names of the day such as the famous painter Frank D. Millet, and Major Archibald Butt, the military aide to President Taft.  When the Titanic struck the iceberg, Candee went up to the boat deck, and all she brought with her was a flask of brandy and a cameo miniature of her mother.  Candee gave these two items to a friend of hers that had pockets, and later on, these items were taken from his body when it was recovered from the ocean.  These items were auctioned off in 2006 for a large amount of money.  Candee made her way to lifeboat number 6, the same lifeboat as Margaret Brown. However, while stepping into the lifeboat, Candee ended up breaking her ankle. The broken ankle gave Candee trouble for quite some time, and for nearly a year, she had to walk with the support of a cane.