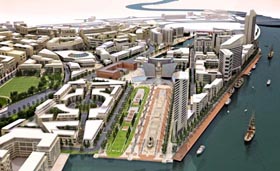 The Titanic Quarter (TQ) in Belfast, Northern Ireland, has been labeled one of the world’s largest urban-waterfront regeneration projects.  Created on the site where the “unsinkable ship” was designed and built, TQ will eventually cover 185 acres.  A 30-year project, it combines residential, commercial, retail, educational and tourism space.  The first phase opened in March, 2012, approximately 50,000 people will live and/or work there as well as the millions who will annually visit the attractions. Below you can find details about some of the attractions featured within the Quarter project.

The Titanic Belfast is a 150,700 square foot venue with Titanic-related exhibits including electronic dark rides, underwater exploration theater, and recreations of the ship’s decks and cabins.  It also incorporates conference and banquet facilities for up to 1000 participants.

Gallery 1: Boomtown Belfast, explains the history of the city in the early 1900s where Harland and Wolff had become the largest shipyard in the world.  At the end of this gallery, visitors proceed through the original shipyard gates to gallery 2.

Gallery 2: The Shipyard exhibit has visitors ascend a replica of one of the huge pillars of the Arrol Gantry (a sophisticated scaffolding system) before entering the Shipyard Ride – “ an electronic dark ride that uses special effects, animations and full-scale reconstructions to recreate the reality of shipbuilding in the early 1900s.”

Gallery 3:  The Launch of Titanic.  Over 100,000 people watched the launch of the Titanic on May 31, 1911.  Exiting the Shipyard Ride, visitors face a large window that looks out to where the Titanic once rested on the slipway.  The glass is fitted with electrodes that switch to a superimposed image of the Titanic.  This is an intense experience that gives a unique vision of how the ship would have looked sitting on the slipway… surely a visitor favorite!

Gallery 4:  The Fit – Out contains many exhibits, models and Computer Generated Imagery to show in great detail exact replicas of first, second and third class cabins, dining areas, engine rooms and much more.

Gallery 5:  Maiden Voyage –  April 2nd, 1912  From Belfast to Southampton, England; to Cherbourg, France; to Queenstown, Ireland …..  visitors become acquainted with passengers and see what life was like aboard the Titanic.

Gallery 6:  The Sinking – Through atmospheric sound and lighting, visitors have a subtle and moving experience of the final hours of the sinking of the Titanic on April 15.

Additional galleries also explain the Aftermath of the sinking as well as Myths and Legends;  Dr. Ballard’s high–definition footage from the wreckage and interactive learning pods are available.

Titanic Beneath is a multi-level Ocean Exploration Center.  Here, visitors can interact with sophisticated 21st Century technology – which helps them understand how the oceans, seabed and earth’s crust behave.

Additional Titanic Attractions and Tours in the Titanic Quarter

Titanic’s Dock and Pump House:  This site where the Titanic last sat on dry land has not changed since 1911.  The pump house has been converted to a Visitor Center – which houses many interactive exhibits.

Titanic Boat Tours:  During this 60-75 minute riverboat tour of the Harland & Wolff shipyards visitors will see the famous Titanic sites around Belfast Harbor.

Belfast Sea Safari:  Speedboats travel at the Titanic’s maximum speed of 24 knots and track the route the Titanic took through Victoria Channel when she left Belfast.  Departing hourly from Odyssey Marina, these tours are guided by specialist local guides.   Visitors over the age of 3 can look forward to a safe, informative and entertaining trip.

Titanic Tours Belfast:  From the luxury of a VIP configured Mercedes Multi Purpose vehicle (MPV), visit the key sites in the history of the construction and launch of the Titanic.  Tours are led by broadcaster and journalist Susie Millar, “the great-granddaughter of Thomas Millar, who worked in Harland & Wolff on the construction of Titanic and then sailed onboard her as an engineer on the fateful maiden voyage to New York in April 1912.”

The Belfast Barge – MV Confiance:  Located on the River Lagan near the Waterfront Hall, discover Belfast’s marine and industrial heritage at Lagan Legacy’s floating exhibition.  First, learn through films, screens and photographs all about the history of industrial Belfast, then, enjoy food, drink and entertainment at the Galley Café.  Visitors can also enjoy art, music, comedy, lectures and film at The Stage – the multi-use event space onboard the barge.

W5 – Interactive Discovery Centre – The Odyssey:  W5 is a science and discovery cener located in the Odyssey on the bank of the River Logan.  It has over 250 interactive exhibits in four exhibition areas that provide unique experiences for all!

There is so much to see and experience.  Check specific web sites for additional information about each venue.  The TQ also has first class lodging, restaurants and entertainment for those who plan to visit… enjoy!