Are you looking for Titanic Universe’s Gift Shop?

Those interested in the Titanic can enjoy many different pieces of Titanic merchandise at a variety of different museum locations and gift shops around the world. Since its maiden voyage on April 14, 1912, the Titanic has been one of the most well known and widely recognized vessels to ever sail the Atlantic. The Titanic name has been imprinted on just about every type of Titanic pictures you can think of from teddy bears, to t-shirts, to jigsaw puzzles.

When given as a gift, Titanic merchandise can bring a smile to the face of any enthusiast of the vessel and give loved ones the opportunity to remember their trip to the museum or simply remember the Titanic itself. Some of the most popular Titanic merchandise items include the various books that were written about the construction, voyage, sinking, and survivors of the tragedy. With reading difficulties spanning all different ages, Titanic books are great for those just learning to read, or those who wish to plunge deeper into the history and interesting facts behind the Titanic.

Titanic merchandise also spans further than the historic shipwreck. There have been at least two movies made based on the Titanic including the 1997 Oscar winning film directed by James Cameron. Movie posters, film cells, and dolls have been made in the likeness of the characters from the movie and are considered collectors items. Many of the historic Titanic artifacts such as the cafe menu, newspapers covering the disaster, and even pieces of china recovered from the Titanic have been replicated and made into Titanic merchandise that your family can take home to cherish. 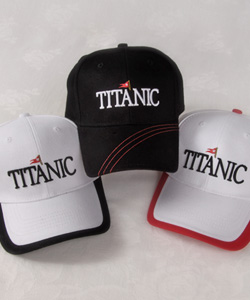