There are an infinite number of Titanic books written by every possible perspective. Some are eyewitness accounts, some cover the artifacts and wreckage, some are fictional love stories, and there are even children’s books based on the historic event. No matter what the nature of the Titanic book involves, one can be sure that the epic story of one of the largest maritime disasters will be retold with vivid detail. With the 100th anniversary of the Titanic’s maiden voyage quickly approaching, expect many more Titanic books to be released to commemorate the event. For a complete list of Titanic books, check out the Amazon store, but here are some of the most famous texts concerning the RMS Titanic. 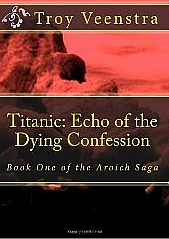 Titanic: Echo of the Dying Confession
by Troy Veenstrsa

Think the Titanic hit an iceberg by accident? Do you think that the whole situation befalling the steamship was clearly a situation of being in the wrong place at the wrong time? You might rethink your answer once you read this novel. What if I were to tell you that a book came out 15 year before the creation of the Titanic, which gave the basic step on how to build and sink a ship called the Titan? What would you say if I told you that someone purposely built the ship with its intended flaws all to make the ship easier to sink if struck upon its port or starboard side? What if I were to tell you that things in this world are not always as clear cut as we would like them to be? Titanic: Echo of the Dying Confession is the historical supernatural fiction, based specifically around the factual details in regards to the design, creation, and ultimately the sinking of the steamship Titanic and gives a whole new idea to the question of what was really the cause of the ship being destroyed. 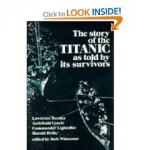 Published in 1960, these amazing accounts are gathered straight from Titanic survivors. This Titanic book is the legacy of those who were fortunate enough to get off the sinking ship alive. Told in old speech and adhering to a different set of ethics (a first class woman’s life was seen as 6 times more valuable than a third class man’s) is beautifully conveyed. The book is also enhanced with old pictures from the time of the tragedy. 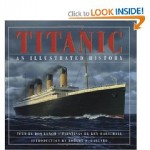 The legacy of the Titanic has been captured in film, fiction, music, and basically any other type of art form you can imagine. All of these are brilliantly captured in the Titanic book Titanic: An Illustrated History. Introduced by Dr. Robert D. Ballard the man who discovered the Titanic wreck in 1985, the titanic book is laced with great information and specialized Titanic art by Ken Marschall to help dramatize the event. Great information, photos, and brilliant paintings make this a must read for Titanic book collectors. 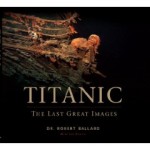 Dr. Robert Ballard, the man who brought you the discovery of the Titanic wreck brings you a Titanic book that will visually blow your mind. The advanced underwater photographic technology revolutionized by Ballard’s team brings the reader some of the most crisp and clear Titanic images ever captured. The eerie lighting and clear photos give the legendary titanic images a creepy and timeless appeal. These are some of the pictures of the Titanic in her watery grave that are thought of whenever one envisions the Titanic shipwreck. The book offers a haunting visual recollection of one of the largest maritime disasters to ever befall humanity. 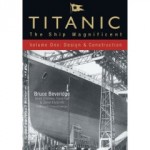 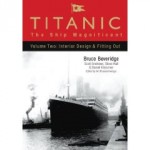 A complete history of the largest passenger ship of her time, Titanic – The Ship Magnificent delves into every detail about the construction of the Titanic. From cobalt blue Spode china and Elkington plate silverware in the a-la-carte restaurant to the design of the boilers and fixtures and fittings on-board the world’s most luxurious vessel, they tell the story of a liner built at the peak of the race between the British, French, and Germans to build bigger and better ships. Volume 2 goes deeper into the interior design of the ship detailing every aesthetic point that the Titanic had to offer.