This is only one part of a larger picture.  For more information, please read Investigating The Titanic Conspiracy and The James Cameron Conspiracy.

Do you still remember the Hollywood block-buster movie film TITANIC with actor Leonardo de Caprio? Well, it is not the real story or perhaps just a part of the story. What you’ll read below is the true story as to what really happened to the famous ship called Titanic. The information you’ll read below is not a conspiracy theory, but rather well-recorded in the books of World History. 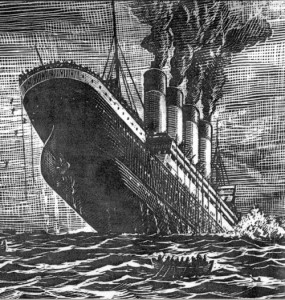 The sinking of the Titanic has always been an event surrounded by a great deal of mystery. Elements that led up to the eventual demise of the ‘unsinkable’ vessel have been questioned and analyzed for nearly 100 years. Many believe that fate brought the maiden voyage of the Titanic to an end, others believe that reckless tactics throughout the voyage played the primary role in her sinking, and others still believe that the Titanic tragedy was brought upon by much more sinister events. One of many Titanic conspiracies floating around, many believe that the sinking of the famous vessel was well planned, well executed, and orchestrated shape the world as we know it today. This is the Federal Reserve Titanic conspiracy.

Certain conspiracy theorists believe that there was a force behind the sinking of the Titanic. A Catholic order known as the Jesuits compelled to carry out Jesus’ work. In this instance, theorists believe that the establishment of the U.S. Federal Reserve was ushered into being. Those in belief of the theory speak of a group of Illuminati, enlightened individuals with a plan for a New World Order, in which it will be necessary to establish the Federal Reserve.

1.    Conducting the nation’s monetary policy by influencing monetary and credit conditions in the economy in pursuit of maximum employment, stable prices, and moderate long-term interest rates.
2.    Supervising and regulating banking institutions to ensure the safety and soundness of the nation’s banking and financial system, and protect the credit rights of consumers.
3.    Maintaining stability of the financial system and containing systemic risk that may arise in financial markets.
4.    Providing financial services to depository institutions, the U.S. government, and foreign official institutions, including playing a major role in operating the nation’s payments system. 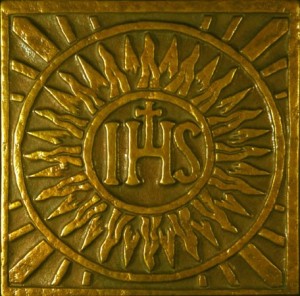 Theorists believe that this Jesuit establishment was created so that the order could loan money, shape the world landscape, and become one of the most powerful organizations in the world. Here’s how the Federal Reserve and the Titanic are connected. In 1910, seven men met on Jekyll island just off the coast of Georgia to plan the Federal Reserve Bank. Nelson Aldrich and Frank Vanderclip represented the Rockefeller (Illuminati) financial empire. Henry Davidson, Charles Norton and Benjamin Strong represented J.P. Morgan (Illuminati). Paul Warburg (Illuminati) represented the Rothschilds (Illuminati) Banking dynasty of Europe. The Rothschilds were the banking agents for the Jesuits and hold `the key to the wealth of the Roman Catholic Church.’

Necessary to their plans, the Federal Reserve did have some opposition; those who saw what the future would become if banking was outside of the government’s hands, the rates set by a private company such as the Fed. All the wealthy and powerful men the Jesuits wanted to get rid of were invited to take the cruise. Three of the richest and most important of these were Benjamin Guggenheim, Isador Strauss, the head of Macy’s Department Stores, and John Jacob Astor, probably the wealthiest man in the world. Their total wealth, at that time, using dollar values of their day was more than 500 million dollars. Today that amount of money would be worth nearly eleven billion dollars. These three men were coaxed and encouraged to board the floating palace. They had to be destroyed because the Jesuits knew they would use their wealth and influence to oppose a Federal Reserve Bank as well as the various wars that were being planned.

It can also be mentioned that J.P. Morgan, the individual contracted to build the Titanic was scheduled to be on the maiden voyage, but canceled.

Supporters of the idea that the Titanic shipwreck was orchestrated carefully, a Jesuit tempore co-adjutor was picked to captain the ship, a man that would do anything for the order and God’s will; Captain Edward Smith. Quite possibly the most experienced captain of the time, Smith had navigated the waters of the Atlantic for 26 years, a master of the icy waters that the Titanic would be sailing. He was a Jesuit and worked for J.P. Morgan. As National Geographic stated in their 1986 documentary entitilted ‘The Secrets of the Titanic,’ “Anyone could be a Jesuit and their identity not be known.”

When the ship departed southern England, on board was Father Francis Browne. He was the most powerful Jesuit in all of Ireland and the Jesuit Master of Edward Smith. Here is Jesuit treachery at its finest. The provincial Father Francis Browne boards the Titanic, photographs the victims, most assuredly briefs the Captain concerning his oath as a Jesuit, and the following morning bids him farewell. (Eric J. Phelps, Vatican Assassins Halcon Unified Services).

Theorists believe that the mysteries surrounding the sinking of the Titanic are simply too coincidental not to be premeditated. Smith, being a mater navigator of the Atlantic, allegedly sailed directly into iceberg territory, failing to heed the numerous warnings given by other ships to decrease speed, and tread carefully. The glancing blow to the side of the Titanic is also said to violate basic safety measurements associated with sailing. Danger is meant to be met head on to avoid exactly what happened to the Titanic.

Less well known: the Titanic’s flare guns fired white flares. Red was (and is) the emergency standard. Other colors were used for identification (white = White Star Line). When the Titanic was sinking, her crew fired her flare guns. The Californian and other ships saw the white flares, but didn’t consider them a distress call. At one point, the Californian, commanded by Captain Lord, may have been as close as six miles to the stricken vessel. 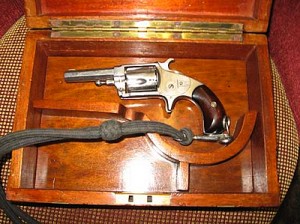 According to other websites, the box containing this gun was the box taken off the Titanic by one of the ship’s crew on that fateful April night. The box contained . . . an unused flare gun.

Clearly, the Five Shot, 33 Pinfire Derringer Revolver here does NOT fit this case. What happened to the Titanic’s flare gun contained therein? It was most probably destroyed as part of White Star Line’s cover-up of the failures leading to the disaster. Someone kept the box for decades. Did they keep the flare gun?

All three men, whom were opposed to the Federal Reserve, died during the sinking of the Titanic.