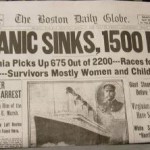 On this day, exactly 102 years ago, the RMS Titanic hit an iceberg. The ship was known to be the world’s biggest and most luxurious ship, and there was so much hype about it, that the passengers could not wait to climb on board. The Titanic was supposed to be unsinkable, and there was even a magazine article from a popular magazine called Shipbuilder that even said in print that the RMS Titanic was practically an unsinkable ship. There were many safety features that made the Titanic state-of-the-art compared to most ships, and she had things like a double bottom and water tight compartments that were also not present on other passenger ships.

A Tragedy That Shocked The World 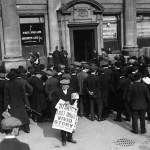 Back in 1912, the world was a very different place. There was a certain amount of naivety in the world, and people had the utmost faith in terms just how far mankind had gone in terms of progress and technology. Remember, by this time, the Wright brothers had created a plane and flew for the first time, and automobiles were being produced so people were feeling pretty good about everything at this point in time.   The truth was, mankind was doing so well in terms of technology and progress that everyone felt on top of the world because they figured that man was so advanced that nothing could ever happen that would be considered disastrous.  However, everything was about to change, and when the Titanic struck the iceberg, the very idea that the world’s most amazing ship was sinking, and the fact that some of the world’s most powerful people were on board. How could it be possible that millionaires and captains of industry could die, but it was happening, and the world was in complete astonishment over it. When Monday morning, April 15, when the news first began to reach the world that the Titanic was in trouble, no one believed it. Also, while the Titanic was in distress and calling for help, many of the ships that responded were in disbelief that the supposedly unsinkable ship was truly in danger. Even Titanic’s sister ship, Olympic were asking questions over and over again, and were under the impression that the wounded liner was coming to meet its sister.  The vice president of White Star Line, Philip Franklin was also in disbelief, and when people started lining up outside of the White Star Line office in New York City demanding answers, he too felt that Titanic sinking was impossibility. Unfortunately, for everyone who thought the worst could never happen, the Titanic sank and took 1500 people with her.

The World Would Never Be the Same 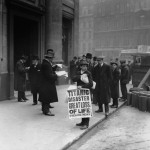 Jack Thayer, a 17 year-old Titanic survivor said it best when he was quoted as saying that “the world we know of today began April 15, 1912.” Thayer was right because when the Titanic survivors came to New York City, the world wanted to know what had happened. Senator William Alden Smith created an inquiry, and the surviving officers, and a few of the survivors, had to testify what had happened to not only to Smith, but to the whole world.  When the world found out that an iceberg had been responsible for the demise of a huge ship with state-of-the-art technology, it once again opened the eyes of everyone. 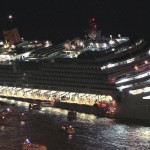 Even since the Titanic sank in 1912, people said that with technology now as advanced as it is now, that ship disasters could never happen again. However, they were quite wrong about thinking that another great big liner could sink because many disasters at sea have happened, and the most ironic part of all, was that each big vessel had enough lifeboats for everyone, but the way they sank rendered them useless.  People need to remember that the Titanic disaster was not just something that happened because men thought they were too superior and drove a ship too fast through an ice-strewn sea, but it was a series of missteps that can happen to anyone any time no matter what year it is.

Back during the early part of the 20th century, when Titanic was built and launched, the world was a more naïve and trusting place where people did not believe that anything horrible could truly happen to them.  The iceberg that ripped through the Titanic’s side woke up its passengers with a terrible jolt that was so hard it threw some of them out of their beds onto the floor, and the loss of the world’s biggest, safest, and most luxurious ship jolted the whole world so hard that it changed in a way that has never been the same since, which is exactly why 102 years later, people are still fascinated with the sinking of the RMS Titanic.