Rare Titanic Pictures For Every Titanic Enthusiast- Part One 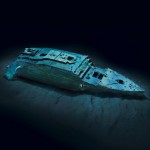 On September 1, 1985, at around one in the morning, Dr. Robert Ballard, and his crew, discovered a shipwreck that had not been in the headlines for 73 years. What was the name of this famous lost ship? The RMS Titanic! The famous ship had sunk on the morning of April 15, 1912, and for years, many people had tried to raise her, but the problem was that no one knew where her wreckage was. However, Ballard, and using some very modern technology that he invented, the young man set out to find the ship of legend. After almost two  months of searching, the most famous shipwreck in the world was located, and Bob Ballard called a pres conference and told the world. Since that time, the Titanic has continued to make headlines, and in 2012, the Titanic had officially been since for exactly 100 years.  To celebrate the 30th anniversary of the Titanic being found, here are the first 5 of 10 rare images of the ship that have rarely been seen by the public.

1. The Side of the Titanic 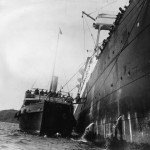 Here is a new of the RMS Titanic from the level of the water. Though it is unknown how this image was taken, possibly from the ferry that was bringing passengers to it from either France or Ireland, it shows the side of the ship.

2. Mail Delivery to the Ship 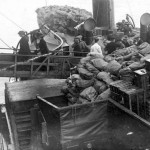 What people do not really understand was that back in the early 20th century, mail delivery was by ship. The RMS Titanic was one such ship, and the R, M, and S stood for Royal Mail Steamer.  The Titanic had a fully functioning post office on board, and there were over 5 thousand sacks of mail going from one country to another. This rare picture is of the sacks of mail being delivered to the Titanic.

3. Passengers of the Titanic 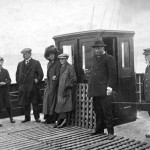 What people need to realize is that back in 1912, things were very different from how they are now. Society was a mixture of the very rich and poor, and the discrepancy between classes was now more evident than on board the Titanic. Here is a rare picture of a few of her passengers, and the fashion sense alone is quite amusing! 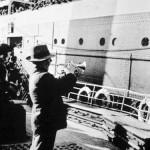 This picture can be taken in one of two ways. This rare image may be of a stewart on one of the ferries taking passengers to the Titanic, and he is announcing a meal, or it can be taken as a man who loves to play music, and the photographer just happened to capture a rare moment of him playing. THough no matter how you take this picture,  the ship right on from of this man is the Titanic. 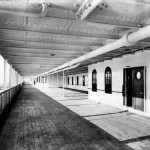 For all Titanic enthusiasts, here is a very lovely rare image of the Titanic’s promenade deck. If you all look closely, you will see an officer walking along it, but who it is exactly is not known. The bridge officers were given two weeks worth of access to the ship before it sailed, so it may be Captain Smith in this picture, or another senior office like SEcond Officer Charles Lightoller, who often talked about how huge the Titanic was and how, “‘you could walk miles covering different ground all the time.” Lightoller himself claimed it took him two weeks to be able to walk around the ship without getting lost, and its clear from this image, just how big that ship really was.

So, what do all of you think about these rare images from the most famous ship in the world? The RMS Titanic sank back in 1912, but even today, she still stimulates the imagination, and there are millions of people that study every nook and cranny of this once glorious ship. Now, 103 years later, those that study this ship want to know more, and these first 5 out of 10 rare images give not just Titanic enthusiasts a glimpse of what life was like back in 1912, and what it was like to be on the biggest ship in the world on her one and only voyage across the ocean. Next week, there will be the other 5 rare images, and one glimpse at these simple black and white images takes anyone that looks at them back to the early 20th century when life was a lot simpler than it is now.