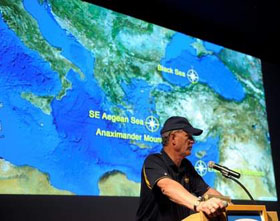 70 year-old deep-sea archeologist and oceanographer Bob Ballard was vacationing in Jackson Hole, Wyo., when Francis J. Ricciardone, U.S. ambassador to Turkey, called to relay a request from the Turkish government.  They asked for his help finding the lost aircraft shot down on June 22nd off the coast of Syria, as well as the bodies of the pilots, Capt. Gokhan Ertan and Lt. Hasan Huseyin Aksoy.  After reviewing the situation, Ballard, who had participated in several recoveries, was ready to start immediately.  Differences of opinion prevailed.  Turkey believed the aircraft was downed in international airspace.  Syria, who paid all the expenses totaling more than “a few” hundred thousand dollars, insisted the incident took place in Syrian airspace.

Ballard and his crew of the deep-sea research vessel, E/V Nautilus, have been exploring the eastern Mediterranean, Black Sea and Aegean Sea since 1999 and were in preparations for a project to find ancient wrecks there.  Ricciardone had spent some time aboard the vessel with Ballard the previous year and knew it was outfitted with advanced search and recovery technology.  The Turkish Navy had already located the downed aircraft in Syrian territory.

When he arrived, Ballard, who had served in the U.S. Navy, said as he approached his ship at the border of Turkey and Syria,  “The place was on fire ashore”  (It seemed to be) “right in a war zone.”

The recovery took two days, culminating on July 4th.  Using a machine created to raise archaeological findings from the sea floor, Ballard and his men were able to maneuver it close enough to grab the straps of the pilots’ clothing and lift them to the surface of the Mediterranean.

In a press conference at the Mystic Aquarium’s Nautilus Live Theater on Thursday, July 12, 2012, Ballard said he would resume his vacation in Block Island, Rhode Island before returning to his Presidency at the  Mystic Aquarium and Institute for Exploration in Connecticut, the base of his operations.   He is also Director of the Institute for Archeological Oceanography at the University of Rhode Island as well as Scientist Emeritus at Wood’s Hole Oceanographic Institution.

Ballard, best known for the 1985 discovery of the legendary ocean liner HMS Titanic, is also a National Geographic Society explorer-in-residence.  His use of a state-of-the-art remotely controlled submersible, deep-sea high-definition cameras, and a high-bandwidth satellite communications system is legendary.