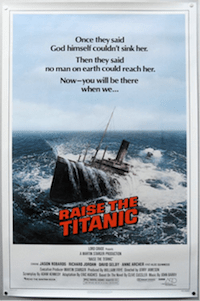 Raise the Titanic is a novel by the popular author Clive Cussler.  In 1980, the book that Cussler wrote was adapted for the big screen, and it came out five years before the real RMS Titanic was actually found on the ocean floor. While the movie featured an all-star cast including Jason Robards, Alec Guinness, Ann Archer, and Richard Jordan as Dirt Pitt, the movie is both a blessing and a curse to the Titanic historical community.

Basic Plot for Raise the Titanic

From the beginning of the movie, Titanic historians get to see pictures from the construction of the majestic  ship, and seeing pictures of the Titanic the size of the movie screen is amazing, but then images fade away and the movie begins. The film spends the next 20 minutes  setting up the fact that the Defense Department is trying to find a way to protect the United States from the Russians. The viewer is introduced to Dirk Pitt, a gun-wielding James Bond type that  one character describes as a “pirate” who only works when he feels like it.   Viewers need to remember that when Raise the Titanic came out, America was neck-deep in the Cold War, and Russia was still a superpower nation with nuclear weapons that posed a formidable threat.  The United States government is trying to protect the country, and they feel that a small mineral named byzanium is the answer to everything. With byzanium, energy waves are emitted from it that will span from the coast of the United States out into infinity and can effectively prevent nuclear missiles from striking, so it is understandable why everyone wants to get their hands on it. Dirk Pitt rescues a man in Russian territory, and then it is through this man that Pitt discovers all about a group of Colorado miners that were sent to Russian territory to get the byzanium.  In order to get the byzanium home, the miners went from Russian territory to England, and then put the mineral in the deck of a very famous ship that left Southampton on April 10, 1912. The byzanium went down with the RMS Titanic, which means that there is only one thing to do…

Dr. Robert Ballard did not find the Titanic until 1985, and when he held a press conference, he reported that the ship was two and a half miles down at the bottom of the ocean. However, back in 1980, when Raise the Titanic was released, there is one part of the movie that does imitate real life, and that is the part when Pitt, and a few Navy admirals, discuss where the Titanic is lying, “you’re talking about 12,500 feet underwater, more than 2 miles down.” Little did those men know that the Titanic really does lie that far down deep, and the only way they could reach it is with small submerisible submarines that are almost identical to the ones that Dr. Ballard used to explore the rusticle covered remains of the world’s most famous ship. 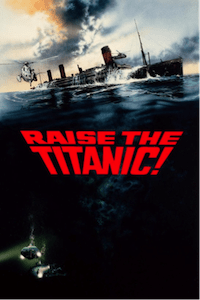 Alec Guiness does have a brief scene with Pitt as Bigelow, a former Titanic officer that survived the sinking and offers Pitt information about the hold where the byzanium was placed. However, one part worthy of mention is when Bigelow gives Pitt the White Star Line flag that he took from the stern flagpole. Bigelow has his own Titanic collection in his pub, and the look on his face when he recalls the glorious ship is enough to bring a tear to one’s eyes. Bigelow’s condition for taking the flag is clear, and he tells Pitt, “if you manage to bring her up again, maybe you’ll put it back where it belongs.”

With the White Star flag in hand, it is time to actually find the Titanic, which means groups of guys in submarines trying to find the ship. At  first, the men in these little submarines have no idea what they are looking for, but eventually get told.  Clues around found in the vacintiy of where the Titanic was thought to go down, but no sign of a ship that’s one –sixth of a mile long. After one submersible full of men, including Gene Seagram, gets attached to one of broken Titanic funnel, then the operation gets pushed forward by a couple of weeks because the men only have about six hours to live. With the aide of dynamite charges, the explosion is supposed to free the Titanic from her watery grave and bring her to the surface. 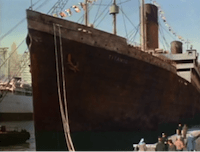 One of the coolest cinematic moments ever is seeing the RMS Titanic break the surface of the ocean, have her lost stern flag put back, and then get towed to New York City. The Titanic finally does make it to New York City, which is one of the only reasons why people who have studied the Titanic for a long time should watch this movie.