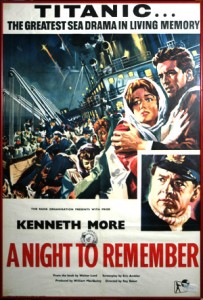 The opening scene of A Night To Remember is a christening of the great ship Titanic, which is something that never happened. For those that earn their living on the sea, it is considered bad luck for a ship to sail without being christened, and many feel that the lack of christening is what doomed Titanic to begin with.   Kenneth More plays Second Office Charles Lightoller in this 1958 movie version of Walter Lord’s incredibly successful book.  This is the first of two ship movies that More will make, in 1960, he goes on to star in Sink the Bismark.  In addition to More, there is another Titanic movie veteran, and that is actor Bernard Fox, who plays Frederick Fleet in this movie, but will then go on to play Colonel Archibald Gracie in James Cameron’s 1997 movie Titanic.  After the christening that never really happened, the mighty Titanic is launched, dragging chains behind her and everyone cheers when she finally enters the water, and now the movie has begun, and it is time to grab your ticket, your bag, and time to climb the gangway and aboard the beautiful Titanic.

The Focus of the Film is Second Officer Charles Lightoller

After the credits have rolled, A Night To Remember starts off with the Second Officer Charles Lightoller on a train. Lightoller is reading an advertisement that every Titanic buff is familiar with, Vinolia Otto toilet soap, and his comments on the advertisement get him chastised by a fellow passenger until that man and his wife find out from Mrs. Lightoller that her husband is going to join the Titanic as her second officer.   After this scene, the movie shows the preparations for Titanic’s voyage including the food that she will carry and the amount of passengers from the three different classes.   Finally, after Lightoller and his wife discuss whether or not he will be moved up from second officer, and also a lively discussion about “garters with big frilly bows,” it is time to head for the grandest ship in the world. The viewer next sees Lightoller on the bridge, and now it is time to set sail with a blow of her mighty steam whistles. The rest of the movie will check with Lightoller during various points of the voyage, especially when disaster strikes. 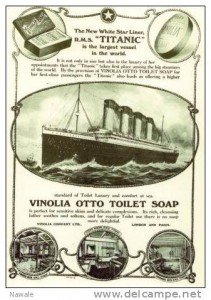 The film them moves from Titanic leaving Southampton directly to Sunday, April 14th, and shows what is going on that day. The Californian is then shown receiving an ice warning, and then Lord and his officer go to the chart room and figure out where the ice is. The movie then goes back to Titanic, showing wireless office Harold Bride delivering wireless messages to the First Class dining room, and he delivers ice warnings that are then given to the captain and Smith passes them on to Bruce Ismay.  The Californian has now encountered ice, and an office asks that Evans send an ice warning to all ships. Evans then remarks that Titanic is close by, and he is spying on the personal messages being sent by her.  All is lively on the big ship, and the viewer is then transported below decks to the third class passengers who are singing and dancing. However, up in first class, everyone is having dinner dressed in their best, and for the first time, Molly Brown is shown talking about her house with “silver dollars cemented into the floors of every room.”  Now the movie goes back to the wireless room, where poor Phillips and Bride are exhausted from having to send so many personal messages, and more just keep coming.  While Bride prepares for bed, Phillips gets an ice warning, but he discards it carelessly on a spike along with other messages that he had previously sent.

A Night To Remember

As the sun goes down, and darkness comes, live on board the Titanic is shown between the wireless room and the two operators disregard of the ice warning.  The drop in temperature is also shown from the point of view of the passengers strolling on deck, and also the fact that the Californian has stopped because of ice. Lightoller and Smith have a conversation about the ice and the drop in temperature, and it shows the second officer doing his rounds, stopping to see some of the first class passengers, going to the smoking room, where he warns a steward of a professional g ambler that might give the ship a bad name, before finally heading to go his cabin.    Jack Phillips infamous brush off of Evans is also shown, although in a much more polite way than Phillips’ original message of “shut up, I am busy.”  Now the scene is set for the bigger maritime disaster in history, as both Lightoller and Evans of the Californian go to bed.

As the rest of the Titanic settles in for bed, Lord of the Californian is woken up and told of a big ship nearby and he tells his officer to use the Morse lamp to try and contact this big ship. The iceberg is spotted, Fleet rings the bell, and the collision happens, and the film then shows how various passengers have reacted, some do not even notice that anything has happened. Various people on the ship speculate about what happened including rumors of a propeller blade being thrown, stopping to avoid a collision, and a minor incident that happened, but the ship will be going on in a matter of minutes. However, below decks it is a far different story as the ship begins to fill with freezing cold water.

The rest of A Night To Remember shows the sinking with the officers filling boats, the distress rockets being fired, the lack of action of the Californian with the exception of them using the Morse lamp, and the resistance of some of the passengers who refuse to believe that the ship is really sinking. Overall, A Night To Remember does a great job of showing the sinking in a realistic way, mostly from the point of view of the passengers and officers. Kenneth More does a good job of showing the courage the Second Officer Charles Lightoller had that night both before and after the sinking. For anyone that has ever read Walter Lord’s book, A Night To Remember the film does not disappoint and is truly one of the best movies ever made about the disaster. 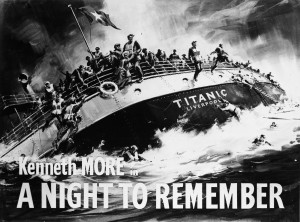