A Funny Look at the Titanic Movie In 8- Bit Cinema 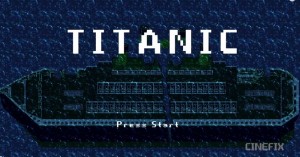 The Titanic has been gone now for 103 years, but she is still being talked about to this day. The story of her survivors and victims too are still being written about in the newspapers, and on television, even to this day. Right now, a new Titanic game is coming out, and it looks so amazing that everyone who has ever studied the grand ship is excited, and has even donated money to help get the game going. However, there is also a lighter side of Titanic that people may not think of, but someone finally has thought of something fun especially since the Titanic movie came out.  How many of you ever played an old Nintendo game?  Well, can you imagine the whole Titanic movie being done in an 8-bit video game style?

The Beginning of the Video

The beginning of this little masterpiece starts off just like the Titanic movie did. The viewer gets to see the inside of the ship where Old Rose in her wheel chair talking to Brock. Since this version of Titanic is supposed to be a video game, this is how the game starts, which makes sense because that is now the movie begins. Old Rose is asked about the famous Heart of the Ocean necklace, and the old and rusty Titanic is suddenly rejuvenated to how she was back in 1912.   After the viewer sees the “new game” being chosen, the first scene that is seen is Jack and Fabrizio in the bar playing cards. The bet is chosen, and the viewer gets to see the hand Jack had that wins him the two Titanic tickets.  There are great quotes from that famous scene in the movie, which only adds something to the scenes. After Jack wins the tickets, he hurries out of the bar, down a little dock, and goes right on board the famous ship.

The Heart of the Video

After Jack climbs on board the Titanic, the ship sets sail. Jack goes to the bow of the ship to do his famous, “king of the world” scene, but then he goes inside to his room. The next scene is the famous stern jumping scene, and a tiny redheaded Rose, in a purple dress, goes out to the stern. Jack is scene as the little blond figure, and he goes to talk to Rose. One humorous moment takes place because when the two meet up, the viewer sees that Jack could say one of two things to Rose, which is either jump or don’t do it. The rail breaks, and Jack is there to grab Rose and pull her to safety. The scene with Cal takes place, and the invitation to dinner is given to Jack.  Margaret Brown is there to help Jack dress for the part. Dinner is not shown, but Rose and Jack do go into third class for the Irish party where the two of them have their dance contest.

The Famous Drawing and Car Scene

After the party, Jack and Rose have their famous bow scene, then go below for the drawing scene.  After the picture is drawn, the valet comes to chase Jack and Rose, and they go into the cargo area where the famous car scene happens.

The Iceberg Strike and Sinking

The iceberg hitting the Titanic is shown next, and the next time you see Rose, she has the ax and frees Jack fro being handcuffed to the pipe.  Jack and Rose are then chased by Cal, who is shooting at them, and then head out to the stern of the ship.  The Titanic does break up, sink, and the tiny Jack and Rose swim and then she lays down on the floating wooden panel. Jack does die, and the last thing the viewer sees is Rose on the floating piece of wood.

Overall, the 8 bit cinema does a pretty good job of retelling the Titanic in a much shorter time frame than the actual movie was. Though there are a lot of scenes missing from the video, the fact is that not everything can be done using such a simple format. The sinking too is quite accurate, and even shows the Titanic breaking into two pieces. For anyone that wants to see the movie in a much shorter, and pretty creative format, then this little 8 bit cinema movie wraps up an over three hour movie into a little over three minutes.  Whomever did this little video did a great job, and a lot of the key scenes from the Titanic movie are in it, which is quite amazing considering the format it is presented in.