Titanic Mystery: What Happened to Her Lifeboats? 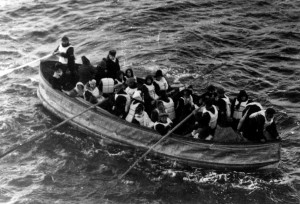 Almost 103 years ago, the RMS Titanic struck an iceberg at 11:40 pm that Sunday night. The impact was so mild that very few people even felt it, and the ones that did basically ignored it and went back to sleep. However, the ship was mortally wounded, and it was only a matter of time before she sank into the frigid waters of the North Atlantic.  For those still in their cabins, the noise up on top of the boat deck began to lure them from their rooms, and that’s when they were told that something was wrong and they had to dress warm, get up on deck, and get into one of the 20 lifeboats that the grand ship contained.  When people get on deck, and saw those small white wooden lifeboats, some of them were cooperative, and some were not, but believe it not, these tiny crafts saved a lot of lives.

Titanic’s Lifeboats After the Sinking

There were 16 standard ifeboats, and four collapsible canvas boats, that contained survivors when the RMS Titanic went down. For hours, these tiny craft floated in the darkness waiting for hope of rescues. One boat had been washed off the ship, and was upside down, and yet there were men on top of it trying to stay alive. However, the wait would not be for long because the RMS Carpathia was on her way to the scene of the disaster at top speed for such a tiny ship. The Titanic went down at 2:20, and it was around 3:30 when Carpathia finally appeared, and then the task came of being taken on board, which in itself took around four hours. Every small lifeboat had to make their way over to the big ship, and then had to be taken onto it. this is where the mystery of Titanic’s lifeboats really begins.

By the time all the lifeboats had been emptied, another problem presented itself, and that was the fact that the Carpathia did not have enough space to take all 20 back to New York City. Out of the 20 lifeboats, Carpathia only had room for 13. The other seven lifeboats were abandoned in the frigid North Atlanta, and soon, the ship was heading for New York, which wold take a few days. 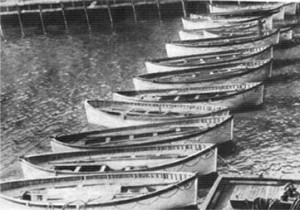 On April 18th, Carpathia arrived in New York City with the 705 Titanic survivors, and the 13 remaining lifeboats. Once the survivors left the ship, the crew of the Carpathia unloaded the 13 Titanic lifeboats and put them where the Titanic herself was supposed to be, and that was in the White Star Line berth.  There is an image of the 13 boats, and some employees standing on them, and these are the last pictures of the lifeboats ever taken. Here, the men removed the name plates, and other markings that had the name Titanic on them. Now, one of the lifeboats had its plate already removed, and that was lifeboat number eight. The eight itself had been taken off the night of the disaster by Tom Jones, an Able Seaman. Jones sent it to the Countess of Rothes with the date of the disaster on it.

After the removal of all identifiable markings, the ultimate fate of the lifeboats gets a little murky. While some White Star Line employees claim the 13 boats were destroyed, this is not true. The fact is that after the Titanic went down, it became law that all ships be equipped with lifeboats for everyone on board.  More than likely, the lifeboats were transported to the RMS Olympic, who was Titanic’s twin, and older sister. the lifeboats were then refitted with all the nameplates for Olympic.

The fate of the Titanic’s lifeboats may be uncertain, but more than likely they were transferred to Olympic where they were used until the ship was taken out of service in 1935. From 1935 to 1937, the fitting and furnishings from the Olympic were sold off, and they are still display at various locations.

Now that the Titanic has been gone 103 years, she is still thought of to this day, and honored every year.